Susie
@susie
one week ago
466 posts

Wow Dusty, what a great dulcimer at a really good price. I wish I could justify another, but I just can't. I think this will go quickly to a lucky person.

To help pay for household renovations, I am parting with perhaps the most visually beautiful dulcimer I own.

It is an elegant Bill Taylor dulcimer made of select quilted maple.  The VSL is 28 inches.  An internal pickup is installed.  I am asking $700 or $800 with hardshell case.  I am willing to drive up to 100 miles for a physical drop-off (I live in northern California) or I’ll split the shipping & insurance with you to anywhere in the continental U.S.

This dulcimer is unique, as it was custom made for special clients who collected beautiful tonewoods and had two luthiers make numerous instruments for them. I obtained this dulcimer from an estate sale when those clients passed away.

Inside the left sound hole, written directly on the back of the dulcimer, it reads “Taylormade Dulcimers” followed by Bill Taylor’s signature.  Inside the right, it reads “Custom artist model/Select quilted maple, walnut & cocobolo/Specially crafted for Al and Fleur Martini.”

The intonation on this dulcimer is spot on, and the sound is very balanced across all the strings.  One interesting feature that used to be more common is a small brad nail on the side of the fretboard by the nut.  This allows you to keep the instrument strung with four strings, but to loosen the fourth string and “hide” it along the side of the instrument when not being used.

close up of back: 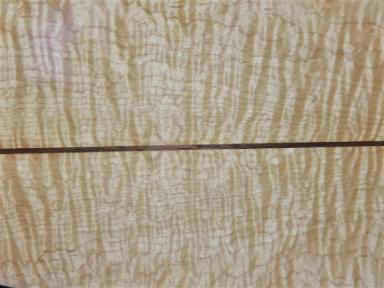 I’ll be happy to take more pictures if you wish, but pictures do not do justice to the quilted maple and the fine lacquered finish.  The wood is more golden than yellow with brownish patterns in the wood that match the cocobolo, but somehow in pictures it all comes out lighter.  When Al Martini died (roughly ten years after his wife passed), fifteen or twenty Bill Taylor dulcimers were auctioned off.  This was one of the two prettiest and the only one with an internal pickup.  I am convinced it basically sat in its case for years since it shows no evidence that it was ever played.  It is in pristine condition.

Bill Taylor was a well-known musician and luthier.  He died last fall.  You can find an obituary in KnoxNews and might also be interested in this 2005 interview in Dulcimer Players News .  Although it has no bearing on the value of this dulcimer, Bill wrote “Emma’s Song” when his daughter was born, and 15 years later the two recorded it together, with Emma on flute, for the first volume of the Masters of the Mountain Dulcimer CD.

I used this dulcimer for a couple of SoundCloud posts: The Wind that Shakes the Barley and The Rose of Aranmore . Both of those recordings were made by plugging directly into a Zoom H4N, so you can hear the pickup in action.  And here is a video of me playing The Last Time I Came O’er the Moor .  Make sure you listen/view long enough to get to the second version of the tune higher up the fretboard.  The pure and balanced tone of the dulcimer really shines in the upper octave.

I have considered selling this dulcimer several times in the past, but whenever I take it out of the case I play a few tunes and fall in love with it again. It is not my main playing instrument, however, and deserves a more loving home.  And I also need some

Please let me know if you are interested.  Send a personal message here and we can exchange email or phone numbers.

P.S.  I am also selling a Dusty Strings D35 hammered dulcimer and a Seagull Coastline 12-string guitar.  Let me know if you're interested.  I won't bother posting ads here for those instruments, but if I sell them to another FOTMD member, I'll make a contribution to the site.