I saw another video of this set a day or two ago.  Brandi Carlisle does an amazing job singing Joni's songs.  I hope Joni understands the profound love so many of us have for her music.

I agree, Dusty, Brandi did an amazing job of singing Carey. She sounded just like Joni!

I've only heard & play the first one you've posted. Sometimes it's called 900 Miles.

A New addition to the Dulcimore Family

Good job on the poster, Steve!

I'm fine with it (assuming we are celebrating indoors--it will be cold where I live). Good to have an easy to remember date!

I, too, enjoyed the video and found it a good pairing with the song. Thanks for posting it. I've got 5 of her albums and love them all.

I've had Blue since it first came out. Love it! And love the other album's of Joni's that I have, too.

John, I'm sure the new owner will be as happy with this Thomas reproduction as I am with mine!

Old Bangum, learned from an album by Richard Dyer-Bennet. The chorus is made up of nonsense syllables.

Hungarian Citera played with a noter

I don't know if a Citera is usually played with a noter or not, but the performance was really impressive! Robin, thanks, for bringing it to our attention.

I was fascinated with the striker, too. Wonder what he was using as the striker?

Three???!!! Who can only have three! Well, a few of my favorite ballads are:

Rothesay Bay, Ca' The Yowes, Caller O'u, The Gairdner And The Plooman, The False Lover Won Back, The Maid Gaed To The Mill, Maggie Lauder, The Golden Skein, Today, Believe Me If All Those Endearing Young Charms, Lass From The Low Countree

I'm among the newer folks to go to a gathering, even with 50+ years with a dulcimer! I was delighted to meet the folks at Berea last May that have responded here--David & Karen Bennett, Ken Hulme, John Knopf, Steven Berger, Irene, as well as many others including Lois, Nina, Glenda, Bobby Ratliff & Deborah, Dan Cox, & Richard Streib that I can presently think of. But we missed Ken Longfield!

It was a great gathering and I hope to see the same folks again as well as new folks next May. I've already begun practicing for next year. What's more, if you're "on the fence" about coming, you won't want to miss the chance to win one of John Knopf's authentic, historic reproduction dulcimers!

Great tune, Kendra...The kind you go around humming when you're happy! Hope to see you again in Berea next year.

What’s your favourite playing style and why?

Being able to play a tune the first time I picked up a dulcimer is what attracted me to it and is still why I like playing it noter or finger and drone style. I have a 3 string, diatonically fretted dulcimer which I've had for 52 years. Until a couple of years ago I was unaware that anyone played a dulcimer any other way! I've learned more in the last year and a half since joining this group than I'd learned in all of the previous years combined. I usually play in Ionian, Bagpipe tuning, or Aeolian and sometimes Dorian. I also have a chromatically fretted dulcimer which I play noter/drone style as well. While I don't play it as often, it certainly is handy for comparing how a tune sounds in 2 different modes.

Here is my Play Music on the Porch Day Photo. I have one with me playing guitar as well.

Mark your calendars, friends, for the last Saturday in August to join folks around the world heading outdoors (if possible) to make music! 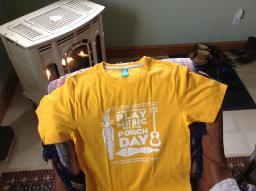 So, Robin, how & when did you first learn of Music On The Porch Day, or did you initiate the world wide movement?

The word phrases were used in an FOTMD discussion, but not a discussion created by the person that posted what I was hunting for, so I should have said it was, as Strumelia suspected, a long comment. I'm not absolutely sure that it was Greg who posted it. He (Greg or someone else) was explaining to someone firstly that the name of a mode is determined by which note falls at the point at which the mode begins, & the key signature note is determined by which note falls at the 3rd fret. At the end of the posted comment he described Parallel Modes and Relative Modes. I'd like to re-read the whole thing.

Lisa, if you mean that the tabs are showing the D on the bass string as d, then that would confuse anyone! Capital letters C - B are how we indicate notes in the octave immediately below middle c. The octave beginning with middle c is: c - b, lower case letters. Two octaves below middle c is often indicated by an apostrophe as, C' - B' and on the other end of the scale it's c' - b'. So when you write your own tabs you can note it this way and when you come back to a tune you won't have to wonder "Did I mean c or C when I wrote this!" Hope this helps!

I've never heard of an Array mbira before. Sounds pretty. Looks kind of scary though!

This is an older book that can still be found on Amazon for $1.95.

Cedar Creek Dulcimers has a Red Meadow kit starting at $139.99. Red Meadow & other kits I have the Classic Walnut kit (shown at the top of the page) made as a chromatic dulcimer. I did not put the kit together myself and had them put the grooves for the frets & the sound holes in, which cost more. A 91 year old gentleman put the kit together for me and I tried to make it easier for him. The dulcimer sounds good. It is heavier than my diatonic dulcimer which is what I usually play. Scroll down on the page to click on the Red Meadow kit.

What's your favorite mournful, spooky, or lonesome song to play?

Lass From The Low Countree, by John Jacob Niles, in Aeolian--key of C. I just posted a question about it in the Noter & Drone Group...Maybe I should have posted it here. I'm still learning to navigate the site.

Lady Mary, AKA Palace Grand, is another favorite mournful ballad.

I'm glad to know about the Strothers string gauge guide. I can see that the gauge suggestions may be a little on the light side in view of what some folks have said, but it's a good reference to have when you're unsure. Thanks again to everyone for your responses.

Thanks to everyone for your input. I've made some notes. I realize there are variables, but even guidelines given are helpful. I broke a couple of 9 gauge strings a few months ago but, alas, I can't recall what I was attempting to tune to at the time.