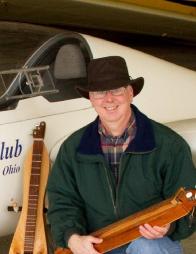 I learned two arrangements of this for mountain dulcimer from tab, but I had not looked at either for a few years before making this video in the fall of 2008. I think this is a combination of the two, plus my own mistakes. It's a nice harmonica song, too. (This was an early effort, and sound is less than stellar. I posted a remastered version on youtube, but that isn't great either. It is a lot easier to record sound without the hiss in the background to begin with than to try and fix it later).

History and background:
This song was a sentimental favorite of Union and Confederate soldiers, both during and after the American Civil War. The war weariness and desire for peace expressed in the song were common amongst the soldiers by the time this song was published in 1864, the third year of the war. There were attempts by both armies to suppress this song because it was considered by some to be bad for morale; these efforts were not successful.

After the war "Tenting Tonight" became a musical staple at gatherings of veterans. Walter Kittredge (1834-1905) was a composer, lecturer, and singer who for a time performed with the famous Hutchinson Family singers.

The tune was first published in 1864. However, Kittredge wrote the words and music earlier as it was popular during much of the Civil War. The sheet music by Ditson (1864) notes that the sheet music was arranged and adapted by the Hutchinson Family. Kittredge spent part of his singing career as a member of the Hutchinson Family, so it is likely the tune was picked up through their singing and became popular before the sheet music was issued. Kittredge wrote the tune in 1863 in response to receiving his draft notice.

The tune was originally published as Tenting on the Old Camp Ground although it became popularly known as Tenting Tonight. It was popular with both civilians and soldiers on both sides.

A newspaper in my hometown of Mt. Clemens, Mich., carried this editorial:

This is a land of liberty, and a country where freedom of speech and a free expression of opinion are the bulwarks that guard our civil liberties. Such at least has been the proud boast of the American people during the last half-century. But there are some dark spots where a certain class of men yet endeavor to choke down such doctrines and place a gag upon such thoughts as conflict with their own[.] [S]outh of Mason and Dixon's line, down in Egypt, Illinois, and here in Mt. Clemens, do we occasionally hear of an attempt of this kind. The Hutchinson family of singers (a family whose reputation has gone before them), advertised a concert in this place for last Tuesday evening and secured the Court House for that purpose. But some of the unterrified Democracy having been told by one of their street oracles that they were the Hutchinson family that General McClellan ordered out of the Army of the Potomac, because the songs of freedom that they sung to the soldiers had a tendency to 'demoralize the army," - an effort was at once made on the part of the "constabulary force" to shut off the exhibition, and on Tuesday night the house was closed against the concert.

"Some men clothed with a little brief authority,
Play such fantastic tricks as make the devil blush."

The operation was repeated on Wednesday night - or attempted to be - but the house was finally opened and lighted. Then another difficulty - there was no corporation officer to be found to give the license, hence the concert was a free one, a collection being taken up to defray expenses, etc.
Now, what is the effect of all this, what impression is naturally created by such a display of backwoods verdancy and lack of cultivation? What do our officials think of accomplishing by descending to such petty political poltroonery as this last exhibition? Sensible people cannot but feel greatly disgusted, and wish for a change.