Curious: do you mean Roosebeck? They've been discussed on FOTMD before.

Or do you mean dulcimers you could buy from an actual Sears & Roebuck catalogue?

Whatever it is, it looks like someone manked around with the location of one of the tuning pegs --- I think that's an extra hole I see there!  Also of note is the shepherd's crook scroll.  I've seen a couple makers use that pattern, and seems designed for use with a dulcimer wall hanger.

Hm.  This one is built ultra light, so gut might be an interesting experiment.

I ought to measure and compare it with my other dulcimer.

Main question remaining for me, then, and if this doesn't open a whole nother can of worms!, is the one of strings.  Are there "dulcimer strings" per se?  I just used what was handy, and that was guitar strings.

Does anyone use gut or nylon, or only metal?  (I've only seen dulcimers with metal strings!)

Thanks for the clarification!

That's shift in language (and terminology) across two continents and half a millennium for you!

Whatever name we want to apply to it, I've got it in my mind to make one now...

Oh, yeah!  I know what a scheitholt is and about the regional use of the name, though of course early on the name was widespread enough in Germany, as it has a section in the Syntagma. As far as this dulcimer goes, I'm just going on the information I've seen!  But now I'm curious: why are you (Ken & Ken) trying to "get away" from the scheitholt terminology?  Would you mind discussing the issue?

But thanks, Ken, for alerting me to the term "arched fretboard".  New word of the day!

I messed around a little with different bridge & nut heights and decided that was a dead end.  I considered frets of various kinds (I do like Randy's wood fret idea, and will keep that in mind for an upcoming project) but decided in the end to leave this dulcimer fretless.  I honestly think it was intended to be fretless, though that could be just wishful thinking. I've never seen an old dulcimer or pictures of old dulcimers or scheitholts or epinettes that are fretless.

A serendipitous discovery!  Whether by conscious design or perhaps other musical forces at work, that bridge pier design of the scheitholt component actually turns out to be a spectacular visual cue as to where to place one's noter or finger.

Aloha Irene!  Thanks for the encouragement!

I'm still considering whether or not to set any frets in there.  If I can get it play without, I'll just leave her fretless! ;)

Hm. A (thin) removable fretboard could be interesting; as could tied frets.


The break looks pretty clean to me, judging from the picture.  Since 80% of the wood is still integral with that big block thing, I'd be hesitant to cut off the remaining wood.

If it were mine, I'd just "freshen up the edges" of the fracture, fashion a bit of wood to fit, and stain it a nice contrasting colour!  If it's an old instrument, dings and dents and cracks and repairs are just part of her life story.

As far as wood putty goes, I've had good luck using it to (functionally) restore a broken old oboe.  One of the ancient block-pivot kinds.  One of the blocks that held the key in place had been broken off. A glob of putty, a good bit of sanding and some dark stain at least allow the instrument to function properly, and from a distance the repair isn't terribly apparent.

Well, the dulcimer project is coming along nicely (I think)!

Bridge, nut, endplates, spacer, end pin and clip have all been fashioned and installed.

Am still playing around with fretted v. fretless.

An overall view of the front end: 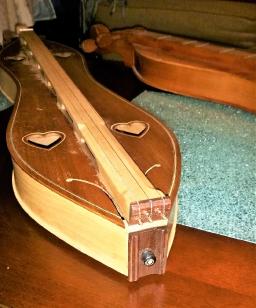 Closeup of the front end, showing a slight bowing up of the nose when strung up.  Right now it's tuned CGc.  The extra hitch pins and the fiddle end pin are intended to secure a wire clip that will clamp the floating bridge down when not in use, thus (hopefully) relieving tension stress on the sound board: 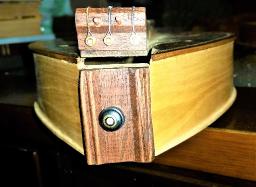 A view down into the body from the scheitholt arcade.  As you can see, the fingerboard is hollow (hence the "scheitholt on a soundbox" description); and the sound board itself is wide open the whole length of the sound box, under the arcade:

I know John C. Knopf noted that Howie Mitchell's design has been discredited, but I'd beg to differ.  While I don't know what the original concept for the design was supposed to be, I do know, with the nose pointing up that way you do get a nice bebung by pressing on the bridge!  That's a pretty cool feature.

Personally, I think this instrument sounds lovely, nice and resonant.  Though I'm still considering fretted v. fretless, I fear I made the bridge and nut too low --- anything but an open string sounds muddled. :/  I'm going to try raising up those two bits to see if I can get a clearer tone on the fingerboard.

Octave undertone on the A string (DAdd)

I know that in organ building a similar effect is actually sought out: when a 16' D and 10 2/3' D (sounding an A) are properly tuned and played together, a resultant pitch, an octave lower, a 32' D is heard. In organs this is handy because not many buildings can house a veritable forest of huge pipes that a proper 32' rank would require.

Kind of odd that it should be the fundamental A you're hearing and not the D.  Kind of a neat effect, though!  Does it only happen with that combination? Or do C/G, E/B and F/C produce similar effects? What happens when you slightly untune one of the strings just a bit?

Well, thanks everyone for the informative replies!

I do plan on attaching an end plate & nut and get it strung up!  Will definitely use brass pins of some kind rather than a wood dowel.

Greetings!  Was directed here from Chiff & Fipple, and am glad I found this forum!

So, I cam across this dulcimer recently and hope that perhaps a maker or knowledgeable player can help with some questions!

First, of course, if anyone can tell by looking who made it, I'd be grateful to learn that much!

As it is, its seems mostly finished. It's a three string instrument with nicely carved scroll, handmade tuning pegs, hollow & fretless fingerboard, transverse bars on the back (one in the upper bout, one in the lower), nicely carved and indented sound holes, inlaid purfling and a very curious cut-out design at the lower end of the instrument.

Obviously, it needs a nut and either one or two end plates where the end pins will be inserted.

The nut up at the scroll end is easy enough to sort out. But down at the lower end, the top of the instrument has been deliberately cut in such a way and has not been glued to the block in such a way that the fingerboard and instrument top can be (slightly) lifted and depressed.

My main questions are:

What is the purpose of this design?
Where should the hitch pins be attached? On the end of the fingerboard, or on the block that the body is attached to.

I'm wondering if this is some kind of "buzzing bridge" like arrangement that one finds on hurdy-gurdies.

There are no maker's marks or labels of any kind. It appears to be extremely well crafted and fitted together. I'd really like to get this working properly, and it's obviously more of a job than just nailing a couple old fiddle strings on there!

Thanks in advance for any help!

Picture 1 shows how the cut-out part of the top of the instrument is definitely not glued to the block.
Picture 2 shows a detail of the scroll and pegs, hopefully for identification!
Picture 3 shows a broad view of the cut-out in the lower bout. 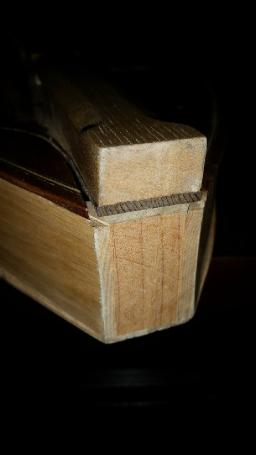 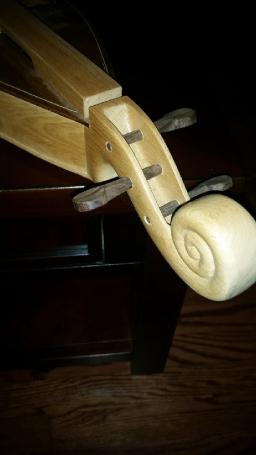 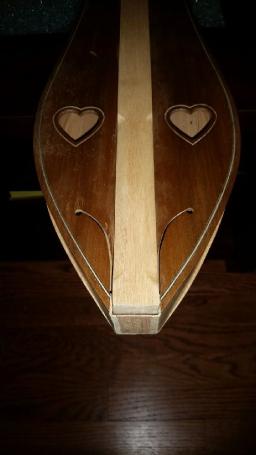