Warren makes fine instruments, chorded or noted. Yes his scale is proprietary as is most modern makers but I've heard many of his pieces over the years and they are wonderful! (Yes Maple has a little brighter tone)  If you are good with the price buy it!

I got my second shot of Moderna today, no side effects on this one or the first......looking forward to seeing the grand babies now!

How Many Dulcimers Do You Own?

Things to do with Prichard and his dulcimers

We know both Charles and his brother John made them.

Where have all the beginners gone, long time passing?

Where have all the beginners gone, long time passing?

The dulcimore is a unique survival of antique musical instruments, and needs explanation. It is oblong, about thirty-four inches in length, with a width at its greatest of about six inches, becoming smaller at each end. Three strings reach from tip to tip, the first and second ones tuned to the same pitch, and the third one forms the bass string. Two octaves and a quarter are marked Out upon the three-quarters of an inch piece of wood that supports, and is just under the strings on the top of the instrument. The Mountaineer "toilers pickin'" it by means of a quill, with which he strikes the three strings at the same time with his right hand, over the gap at the larger end, at the same time using in his left hand a small reed with which he produces the air, or his "single string variations." The music of the dulcimore resembles that of the Scottish bag pipe, in that it is weird and strange. Under its spell on,e finds himself mysteriously holding communion with the gossamer-like manes of the long-departed souls of the palace of Lady Rowena Trevanion, of Tremaine. The dulcimore is rapidly becoming a thing of the past, because the Mountaineers are becoming ashamed'of the musical instrument that stands, with many other things, on the dividing.line between two civilizations. Only a few of them are extant. Within a few more years and this strange old relic of by-gone days will pass, to keep company with
The harp that once thro Tare's Halls
The soul of music shed,
Hangs now as mute on Tara'a Walls,
As if that soul were fled.

What Are You Working On? 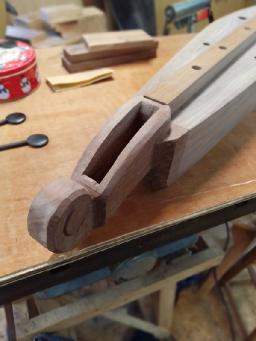 Been carving on a peg head!

Was that the embellished piece that was auctioned off for charity?

I like to rough the staple board and let it set in the shop for about a year, you will know if it's going to have any movement in it by then. I too relieve the bottom with a forstner bit.

Can anyone tell me about John Maxwell Dulcimers.

Maxwell was friends with John Rice Irwin.He did a lot of work on the music display @ the Museum Of Appalachia in Norris Tennessee. There are several pieces of his displayed.

Thanks Dan, the soak and heat  process was in my mind.  Did you notice any advantages to the curved back other than looks?

Yes they are pretty, but I couldn't distinguish any tonal quality changes. The center of the jig is "proud" of the frame, when you tighten the bolts it bends the panel into place. Wetting the panel in hot water in the bathtub, then using a hot air gun whilst torturing the panel in the jig. Hope this helps, always fun to experiment!

I did a few Virginia pieces years ago, there didn't seem to be any interest in them then. I wet the panel and placed it in a clamping jig drawing it to shape with the help of a heat gun. I let them dry for a few days and it worked quite well. Mike Slone and Kevin Messenger were gifted the pieces in Hindman that year.

"That makes sense. I am fascinated that there are well preserved dulcimers that old! Do you know where I could find visuals, recordings, or anything like that of dulcimers of that era?"

I've played several traditional pieces well over one hundred years old and no warping issues! The zither is a very different animal than the lute, requiring very different approaches to design.The truss use came about with the introduction of steel strings cir. 1830's ish for the guitars? I don't know of any one using truss rods for dulcimer traditional or contemporary. I'm sure some one has tried about every thing......

Less sales, I think folks are holding on to their money for good reason. I'm still active in the Dulcimore Den, just working on my own projects!

Size of Soundbox and Loudness

I'm going to suggest a large Galax with heavy strings drawn up tighter than a banjo.......like a MawHee on steroids?

Hello Dan. Does 'galax' mean a dulcimer with a 'false bottom' or 'possum board?' Or is it the wide oblong shape that denotes a galax? I do not have access to any means to curve wood into the shape of traditional dulcimers such as a lozenge dulcimer, however if you are referring to the false bottom, I have been adding these with noticeable benefit!
Thanks,
Nate
Like KenH said, elliptical, deep body and false bottom. (Built in possum board) I also put feet on the bottom of my false bottoms! I may look into one of these... just have to figure out what to call it?
updated by @dan: 07/09/20 03:19:19PM

I saw that piece and thought it was quite interesting. (Still do!) There are a lot of pieces out there that were made one off. If the maker didn't sign it, we may never know?

Size of Soundbox and Loudness

I'm going to suggest a large Galax with heavy strings drawn up tighter than a banjo.......like a Mahhee in steroids?

A bit of "our" humor

...and my favorite, Locrian!

Not really needed. I make my staple boards with them on the Kentucky pieces because the old masters did. Like Bobby said, we strum about staple 14, a few inches beyond the hollow.

What's your favorite tune or dulcimer to play this month?

The wheel fiddle looks really nice Dan .... was it built to a specific plan?

No, just my own design, "keep it simple" two string, ten key.

What's your favorite tune or dulcimer to play this month?

Wheel fiddle I made out in the shop a short time ago, been working on an embellished Go Tell Aunt Rhody because it is an easy tune.

The CEO is buying us lunch today!!!

I work at a Medical Supply Distributor and when face shields or goggles come in we all stop, process them and right out the door they go! Other than that, blessed to be in the right job at the right time.


This is the guy I deal with for wooden pegs...

“We sometimes say they’ve taken out all the wrong notes, because it does not have all the sharps, flats, all the keys that a piano has, but we have enough notes to play in a particular key and play a song without hitting too many wrong notes,” Johnston said.

Irene showed us how to do this @ the Berea Gathering!

Walnut is beautiful!!! Happiest Birthday to ya!!!

I clean with distilled water, gently wiping with a soft cotton cloth (an old t-shirt) and Q-tips. Dry air is not good for any instrument so some sort of humidifier would be good. Making them playable would have to be determined by a luthier, depending on whether "you" are O.K. with altering them from an original state, maybe museum pieces?

Do not adjust your set!

Our beloved John Henry, thank you for sharing!!!

Walnut Thomas with possum board

I greatly enjoyed this interview with my young friend Hunter Walker.  I think Hunter was thirteen or fourteen when we met in-person at the Vandalia Gathering in Charleston WV.  (First, we met online at Everything Dulcimer.)

Can't find credit for the young lady with him?


I get my blanks off ebay,  bone blanks

You are right @dusty-turtle, it will catch on and you will be able to order any color you want. I suspect any more than an overlay would start inherent problems with tonal qualities, but less is more! IMHO

It's on my calendar for 2020. I will not schedule any overseas trips near the date again. Originally my trip to Italy was to start on May1, but the tour company had to move the starting date to May 8 which meant coming back on May 19 rather than May 12. Had the original schedule worked I would have arrived home on Sunday and left for Berea on Wednesday. I'm looking forward to next year.

Wonderful to hear this Ken, we have you scheduled to teach the History class next Gathering!

I've heard the name, but don't know any thing about him. Google only had his Obit and it list him as a guitar maker?

Sorry I can't be more help.