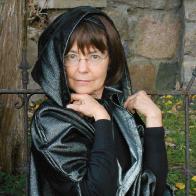 It's said your first language colors your thinking. (Trust me, thiswill get to the dulcimer.) Back when folks learned computer programming, the same thing happened even in later learned programming languages. Staying linguistic, I find knowing Latin both helped and hurt for Romance languages -- stopped learning Italian as it disrupted what Spanish I knew / also my French is courtesy of ballet, but I can usually get the gist of a lot of written French. (Similarly my self-taught & mainly forgotten written Russian helps & hurts with other Cyrillic languages.) Nowadays I'm heavily into American Sign Language, a whole concept way of thinking.

Now for the dulcimer. It's usually not chromatic. Pianos are chromatic and that was my first instrument. This has been reminiscent of Adrian Monk saying about his Obsessive Compulsive Disorder, "It's a blessing ... and a curse." Music theory lets me figure out the whole steps and half steps by visualizing the piano keyboard. (Electric keyboards and even the Indian harmonium use the same.) Great for Standard Music Notation and transposing. I've begun following the talk about tunings, modes, et cetera. I know it's a slow process to learn some of that. I also love the way the dulcimer seems to force me to use my ear. Piano was SMN training and nearly killed hearing beyond interpretation.

Does anybody but me find they get confused by the way the notes don't stay in one place when you change tunings?

On the piano, yes, and even the guitar, if you don't try unusual things (for a while I experimented with Drop D tuning, which still only changed one note) the notes stay in their places. A C doesn't suddenly become a black key somewhere else.

I don't know when or even if I'll ever jam with my dulcimer. Sometimes I feel like a Kindergarten report card: Does not play well with others!

I can live with that, but I sure hate having to re-write my tunings and tab things out for myself just so it still makes sense a few months later.

Maybe that ear training will move me beyond the problem, but I am still working at a blessed/cursed fretboard my brain finds moves around like the earth in an earthquake and its aftershocks. Well, maybe not that bad, but certainly not as stable as those lovely fixed keyboards.

<SIGH!> (Is there a smiley for that?) They say learning new languages or musical instruments is great for keeping your brain working, but, but, but . . .