i was not asking if i should or should not use them my question was .

anyone know of any adhesive Pearlie markers that  will stay on ? and where to get them ....

this is what i ended up ordering i think they will serve the purpose and look nice.

i was not asking if i should or should not use them my question was .

anyone know of any adhesive Pearlie markers that  will stay on ? and where to get them ....

this is what i ended up ordering i think they will serve the purpose and look nice.

I won't discourage you from getting fret markers, that is your personal choice to make. To answer your original question, I too have used Inlay Stickers on other instruments. They are very thin (your fingers won't notice them), easy to apply, stay put, look real nice, and can be removed without sticky residue or harm to the instrument. If you go the route of fret markers, I would recommend  http://inlaystickers.com. Lots of neat choices too!

I have used the same inlay stickers that Dusty did. I got impatient with diatonic tuning on my Merlin and had it fully chromaticized but missed the ease of only having to figure out diatonic frets. In addition to fret markers, Jockomo also makes strip stickers so I placed one across each diatonic fret. I am dyslexic so I need more visual cues than the average dulcimer player but that really helped. I have also found that giving yourself cues when you are beginning is not a barrier to learning. As you learn you will find yourself not paying attention to the markers when you no longer need them. I recently decided to switch one of the strips that had been on about a year. I expected to have to do a lot of cleaning but it came off with no residue and stuck back on to it's new location. I think they recommend 6 months but my experience was pretty good.

@jp, I have two comments here which are kind of contradictory.  The first is why you should not need fret markers.  The second is what to do if you get them.

First, to get used to the 1-1/2 fret does take some time.  It took me about a year even though I'm used to chromatic instruments such as the guitar and mandolin.  When I finally "got" it, it was just a matter of mental focus.  I forced myself to think "fat, fat, skinny" as the beginning of the fretboard.  The first two frets are fat, then comes that skinny third fret.  Once I started imagining the space on the fretboard as indicating where the notes were rather than the fretwire itself, I stopped getting confused by the 1-1/2 fret.  If you put fret markers in those normal places (3, 5, 7, 10), which I strongly suggest so that you don't get confused by other dulcimers with fret markers, they will not necessarily help you get used to to the 1-1/2 fret. That's just a hurdle you have to overcome.

Second, I agree with you about what kind of markers to get. If you want something temporary, just use masking tape.  If you want something that you plan to leave on for a while, get nice inlay stickers.  The ones I got are easily removable and don't leave any trace that can't be wiped away easily. They are also so thin that you don't notice them at all when fingering the fretboard.  Until you look closely, they appear to by nice inlay, and you can choose a variety of different designs, so you can personalize your instrument pretty easily.  Be aware that most are made for guitars, which usually have a wider fretboard than dulcimers do.  And if the fret markers involve a design that connects several frets in a row, they won't work on the diatonic fretboard of the dulcimer.  I think the ones I got were made for a ukulele, so they're pretty small.  The website I linked to earlier has a range of shapes, sizes, colors, and designs, so take your time looking through the options and find something that will not detract from the look of your dulcimer.

You could glue on small pearl shirt buttons.

do not want Avery labels ...

i am inquiring about stick on (proprietary) fret markers pearized or abalone.

I have not used them on a dulcimer. On paper they stay on well so long as the page is not handled multiple times per day. On the dulcimer I would not think there would be any kind of consistent "trauma" to them to dislodge them. When the time comes to remove them permanently some lemon oil will remove the vestiges of the sticky glue.

i need a base, the 1 1/2 fret throws me off would like to mark the third fret.

my concern is do the stickers stay on well?

is there a brand that is better or are they all the same?

i do not want nasty marker or avery labels on my instrument.

Dusty those are some fine turtles.

Avery Dennison, the label company, makes some removeable labels. You could get some and cut whatever shape you want. If you want circles use a hole punch, then use the "waste" dots for your markers.

I agree with Dusty.  If you feel you must use markers,why not use a water-based marker as a temporary one until you learn the frets by sight/feel.  Then you can wipe them off when you feel confident in your playing.

My first comment, @jp, is that unlike chromatic instruments, dulcimers do not need fret markers because the pattern of skinny and fat frets serve as fret markers.  Some of my dulcimers have no fret markers at all and I get by fine.

Still, some do, and I find them minimally helpful.  And I have to admit that for purely decorative purposes I put small sea turtle inlay stickers on one of my dulcimers: 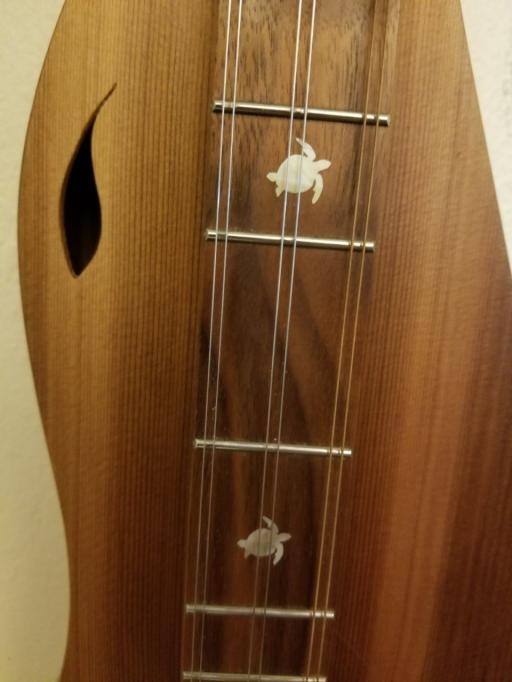 I cannot remember for sure, but I might have purchased them from Jockomo:  https://www.inlaystickers.com/ .

fell out of interest for a while.... i hope it does not happen again.

downstairs to the drill press ... anyone know of any adhesive Pearlie markers that

will stay on ? and where to get them.... i am wary of buying from Amazon or Ebay without

knowing what i am getting ... thank you.