Wondering Who Built This Dulcimer

Oh, very good!  That's reassuring.  Yes, you should give a few additional details there on ED ...though no need to give publish your email address or personal info publicly. Helps to give a little background tho- if I were a potential buyer I'd be leery of an ad with zero info about the seller, espec with them being brand new to joining.

Good luck with your sale Sheryl!

Lisa, It's me. I just haven't figured out ED completely yet. I've been an ED stalker for awhile now, but just joined. I'll go complete my profile. Thanks for looking out for me!

Sheryl, are you now reselling the Presnell right away over on the EverythingDulcimer site?

I'm just curious....  I wouldn't want some scammer over there on ED trying to rip people off while using your photos and info...that actually happens on instrument sites.  The seller there just now joined ED with no other posts and does not give any info about themselves in their profile.  It raises a red flag for me, so I just wanted to check if that's you reselling the Presnell.

Will keep my eyes open for a recording on that Stamper, Robin C!

Nettie used C,c,c and you can find some examples of her playing on the web. However, she also used 1-5-5 latterly. I think that unison tuning was probably the Hicks family tuning and her switch to 1-5-5 was influenced by meeting other players like RLS. The 6+ makes sense in 1-1-1 and Ed told RLS that he put it on so Nettie could play those pretty Christmas tunes.

Some of the Presnell dulcimers don't play well if you tune the strings open. You need to tune the drones to the fretted root note - the 7th fret in 1-1-1 From what I've heard of Nettie's playing she never went down that low. Her playing was concentrated around the 7th fret root. Hence the long scale giving her more room up the top of the fretboard.

My Presnell plays well fro the nut so I think she was already regularly using 1-5-5 as well as 1-1-1 at the time it was built.

I'm the proud owner of Edd Presnell's #462 dulcimer built October 5th, 1966. It looks like it was hardly ever played. 29" vsl. Any recommendations for what key I should tune this to? C,c,c? I will post pic's soon.

Didn't get the Hicks, someone beat me to it.

Robin, Were you thinking Stanley Hicks on that other dulcimer?

I managed to buy an I.D Stamper dulcimer last week - one of his long scale ones that he used for those A minor slack key tunes like 900 miles and Darlin Cory so my Presnell is going back to the C,c,c tuning that Nettie Presnell used.  Hopefully the Stamper dulcimer will be here in a couple of weeks although clearing dulcimers through UK customs is taking weeks at present!!!! 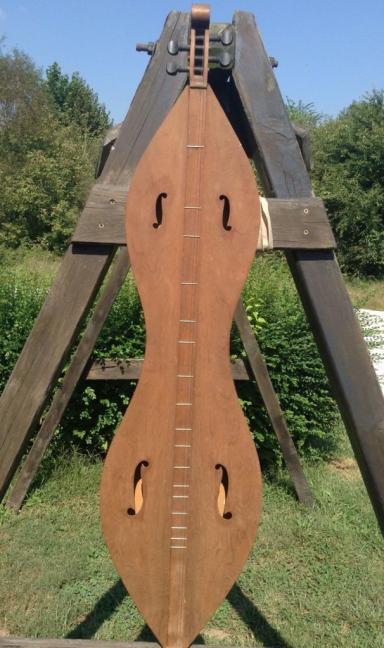 Robin, Good information. I couldn't have said it better. I heard your recording of 900 Miles on your jumbo Presnell, very nice indeed.

The first dulcimer is a Presnell the second looks like a Hicks (he also built mountain banjos) - the large hearts and sloping shoulders make Hicks a possibility.  Pricing is difficult because so few of these dulcimers come up for sale.  They sort of have two prices - the first price is a players price; basically what the instrument is worth to a dulcimer musician.  There are very few of us who actually play, gig and record with these old dulcimers.  So the player's pricing for a Presnell is around $350-$450 and the Hicks about the same.  So about the price of a new McSpadden.  If you can get the Hicks for under $350 I'd certainly be interested if you didn't want to keep it (I have a Presnell).  The second price is the collectors price - it is to the long term advantage of a collector to push the purchase price up, so your guess is as good as mine on that score but sometimes these old dulcimers go for silly money if two collectors are bidding.

Personally speaking, I think that wherever possible we should try and keep these old instruments within the dulcimer playing community.

I wouldn't do that, Dan. I'd rather learn the 'curve'. It was a different situation with my BD, which was built in 2006. Ken Bloom installed them for me. (And I got to see his Workshop. Woo-hoo!) But I appreciate your advice.

If it is a Presnell, changing to mechanical tuners would adversly affect the value of the dulcimer.  I currently own six dulcimers with wooden pegs and enjoy them all.

Dan, only a bad experience (Bowed Dulcimer- upgraded to Perfection planetary pegs). You make a good point. Still, I am intrigued.

Do you have any experience using the wooden tuning pegs, Sheryl?  They have a fairly steep 'learning curve' and are troubling for anyone with hand problems (arthritis, etc.).

My next obvious question is, what should I expect to pay for it if I can get it? I'd just like to recognize a deal, if there is one here.

I see what you see Phil. How about these? Same sail, maybe same maker... Raleigh NC, if that helps.

Another Dulcimer with a friend.jpg  •  44KB

Looks like it could be a Edd Presnell. Here's a link that has one.

I'm seeing this dulcimer at a sale this weekend, and wondering if anyone recognizes it and who may have built it. I can look inside it when the sale starts, but I am hoping to have an idea before I go to the sale. This is the only photo I have. Thanks!