The Onion Flute - mother of the kazoo

Forums » Discussions » Adventures with 'other' instruments... » Page » The Onion Flute - mother of the kazoo

On the right is a Compression Slide-Repair Coupling, then a plain 1/2" coupling rounded on both ends, a 4-5" length of 1/2 pipe and last, a second coupling sanded into a mouthpiece. A 1/4" hole is drilled below the end. A membrane of plastic bag is held in place under the screw cap on the right end.

love the sound of it.

Ah - sorry I didn't get that, John... blame it on the fact that English is a foreign language to me.

Thanks for the additional info on the crumhorn.

I was making an attempt at humour, Peter. But your onion flute does indeed sound very similar to a crumhorn. They had a brief (50 years or so I believe) period of popularity in the late 1500s I think. They are a fairly simple reed pipe - double oboe type reed in a wooden pipe with a windcap over the reed to protect it, the lower end of the pipe bent up presumably imitating a horn. Limited to a 9 note scale they have a deep for their size buzzing tone.

Thanks for the reply, John!

Actually, I am not familiar with the background of medieval instruments, so I can't answer your crumhorn question (in German: Krummhorn"). To play the onion flute (or kazoo) at least half-decent, you should have some singing skills - otherwise an instrument would still be the better alternative. I think the onion flute has never been an instrument that has been taken too seriously.

Yes, I have played MD and kazoo together (by using a harmonica holder and one of my selfmade wooden kazoos):

Here's something with kazoo and MD I recorded a few months ago...

Just watched the video you put up - it sounds great, and also when you strum along on the dulcimer. You can hardly tell that you're not playing melody on the dulcimer as well. Is this why the crumhorn had such a short existence, because the onion flute could reproduce the sound with such little effort?

Presumably you could make up a wire `harmonica holder' type thing to have both hand free so you could play and kazoo at the same time?

for you and all others who are interested: here is a sound sample, a solo in the first part and accompanied by mountain dulcimer in the second part. Enjoy.

wow never realized that the kazoo was that old? can't wait to hear it played. Might have to get one of my own.

Maybe I can make a recording this weekend.

Very interesting, Peter, and well researched. I had no idea that the kazoo had such a background. Your onion flute is easily the most beautiful kazoo I've ever seen.

I always liked the kazoo as a "melody instrument" that allows you to have your hands free for playing guitar, ukulele - or MD or Kantele at the same time. As I did some research during the last time I found some information about the history of the instrument.

(One of) the oldest printed descriptions seems to be on p. 229f of the book "L'Harmonie universelle" by Marin Mersenne from 1637. In a row of 5 "chalumeaus" the 4th instrument is an "onion flute". It is mentioned and described on the next page:

There also appears the name Eunuque (Eunuch flute), but it seems that "Eunuch flute" has up to then never been the name for the instrument. It is more likely that this was a misinterpretation of a word Mersenne wasn't able to read in a hand written description of the instrument he had received in a letter about 1633.

The principle of the instrument is described correctly by Mersenne - it is really a kazoo. At that time the membrane must have been of organic material, e.g. onion skin (is that word right in English?).

In the 18th century the name "Mirliton" was used for the instrument, that was often just made of a tube, like bamboo kazoo is still today.

And then I found that there are still makers who build that "mother of the kazoo"! Mine is mady by Thomas Rezanka, a teacher and bagpipe builder from Austria. I just like to share some photos with you. I don't have a sound sample yet - it sounds like you expect to sound a kazoo. Rezanka uses Bamboo skin as a membran (so that's very close to onion skin) - but of course if it breaks you can also use a piece of a (PE) sandwich bag etc. 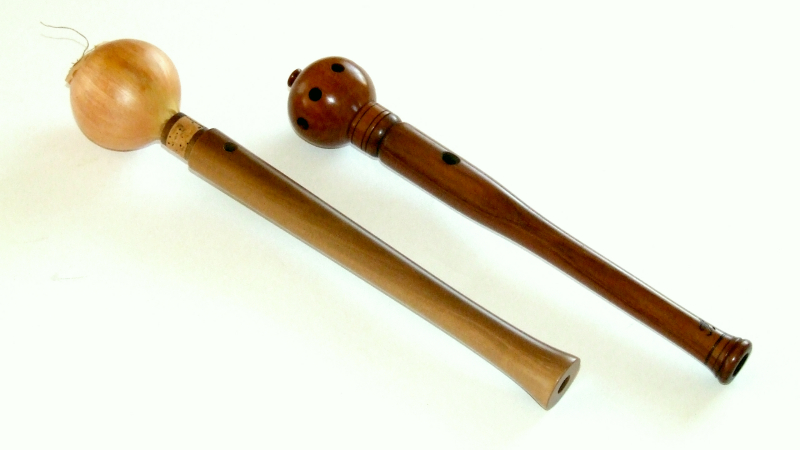 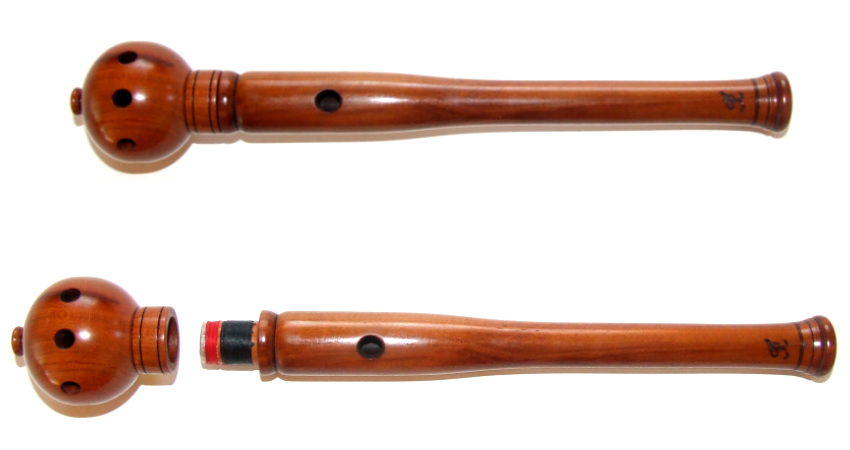