Robin, that flute is a real beauty!

I totally relate to your excitement. I've been learning to play the pennywhistle for the past couple of months now, and the largest/lowest one I have right now is a brass low G Dixon which is two and a half steps higher than your D flute. But while learning, I'm mostly playing my higher whistles, and playing a bit with Brian on fiddle, in the kitchen.
The low whistles and flutes require a good set of lungs, and lots of air, for sure! ..but they have such a velvety rich tone.

Both the Irish flute and the penny whistle come in various sizes/keys, and materials, and some are even sold in a set with interchangeable heads to convert them back and forth between whistle and flute....both having basically the same 6 holes. The lowest penny whistles come I think in the low key of C, a step below your D flute.

You sound wonderful already Robin!  If you love it as much as I'm loving learning my new whistles, then you'll be a hopelessly in love 'lost soul'.

This music thing is the Devil!   lol

Great that you are challenging yourself with your new flute. It does have a beautiful tone and I think you'll be playing it really soon at your Pub gigs, you are sounding good.

Thanks Robin - I do like the sound of a well played Irish flute.  I've seem Mike McGoldrick play a number of times at festivals and he joined me on dulcimer, Nick on banjo and Mike Harding on mandolin for a couple of tunes outside the beer tent at SFF a few years ago - that was a real treat!  Its going to take me a good while to reach my 10,000 hours of practice to play like him

Some wind instruments can sound rather strident but not your flute.  :) 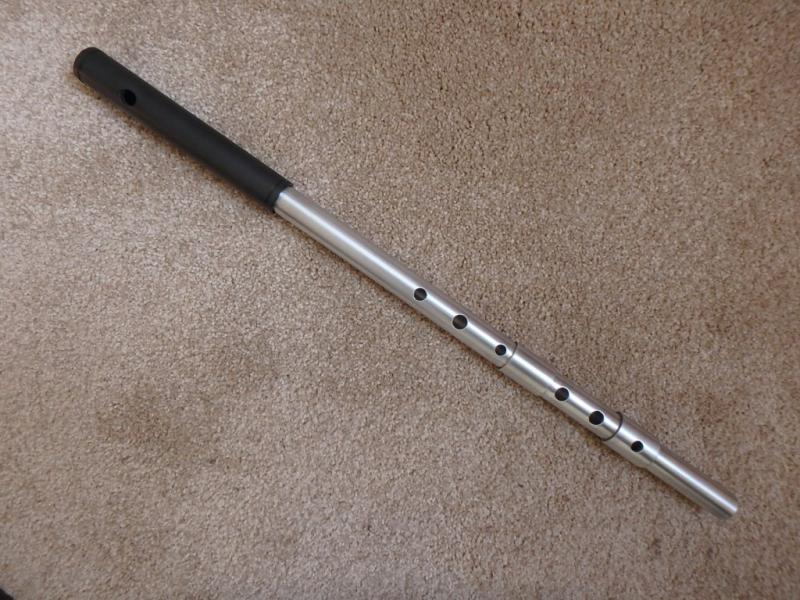 I have a new toy

I've long been after a melody instrument for playing at sessions that has a bit of gravitas and would be a challenge to learn.  I thought of the fiddle but we already have a fiddler in the house so I looked elsewhere.  I'd seen some wonderful Irish D flute players at sessions and gigs and had the idea of learning to play one in the back of my mind.  This summer at Shrewsbury Folk Festival I met Jem Hammond.  He was running some of the tune workshops and I got the chance to talk with him in the bar.  He showed me the different types of flute he played, with keys and without, and suggested I buy a Gary Somers aluminium flute with a delrin head.  He had one with him and said that they were well made with a great embouchure hole and solid tone across the octaves.

I emailed Gary in Brazil and he pointed me towards a shop in the UK that had one.  Luckily I was working in Canterbury, where the shop was, a couple of weeks ago so I called them and collected the flute.  I went straight from Canterbury to Lundy Island for a week's rock climbing.  So as well as my dulcimer I also had a new flute to take across to the Island

I carried the flute when walking around the island to various climbing areas and eventually managed to get a scale out of it!!!  Getting any noise from it at all was (and still is) a bit hit or miss but my embouchure is starting to come.  Having heard Jem play the same model of flute I know that there's bags of rich tone hidden within it and the more I practice the more I'll find.

I love the fact that it is such a kinaesthetic instrument to play and that the tone and intonation come from the player's skill.  Like golf, as a beginner you'll hit one or two shots in a round that really feel good and with the flute I'll hit one or two notes that just resonate.  I'm hoping that the more I play the more of those good notes I'll be able to hit and the stronger my overall tone will be.

Right now, a couple of weeks in, I'm at the very much a beginner stage.  It is doing me good to struggle through the learning process.  I've just recorded myself for the first time this morning coffee break so I can assess what I need to work on (mmm.... breath, tone and intonation would be good starters!!!!)