The Dulcimer Book by Jean Ritchie

Ken Hulme
@ken-hulme
13 years ago
2,025 posts
My second favorite to Jean's classic is The Appalachian Dulcimer Book by Michael Murphy, another long out of print but available on-line volume.

@folkfan
13 years ago
362 posts
I have a book titled Play the Dulcimer by Ear and Other Easy Ways. The authors give instructions on how to tune Ionian, Bagpipe and Aeolian, then they list "Exotic Tunings" under which are Mixolydian, Dorian, Lydian, and Phrygian. A few songs are listed for each, except for Lydian. The authors ask the readers to find a Lydian tune and if they do to please let the authors know what it is. And Locrian simply isn't mentioned at all. Jean Ritchie is quoted as saying that the tunings listed as exotic "Are not used much any more." And all the tunings are given with C as the do note. Publication date 1969-1970 Strumelia said:
Yes that book might not really be that hard to write....it might only have 2 or 3 tunes in it! ;D

Ken Hulme
@ken-hulme
13 years ago
2,025 posts
Bill - if you know the Mode, the Key doesn't matter. If you have Tab for one, it works for all...Ionian: DAA, CGG, EBB, GDD are all the sameMixolydian: DAd, CGc, EBe, GDg are all the same

Bill Lewis
@bill-lewis
13 years ago
48 posts
Thank you Lisa, thats a little easier for me.

Strumelia
@strumelia
13 years ago
2,129 posts
Bill, the short answer, if you are fretting only the melody string, is this:Look in the list of songs at the beginning of the book, where Jean tells what MODE the song is in.Tune like this for each mode:Mixolydian= DAdAeolian= DACIonian= DAADorian= DAGForget about the other modes for the time being. These four are plenty to start.Note that your melody string is the only one you need to retune. And also note that in DAd, the melody string d is the highest note you will tune to. When going from DAd to any of the other modes, you will be tuning your melody string DOWN, not up.Ok? This will get you started!

Bill Lewis
@bill-lewis
13 years ago
48 posts
Thanks for the answer Lisa, now my head is really spinning. Trying to learn all the different modes and keys and what not makes my head spin. I will print the chart out and keep for my reference and just keep plugging away. Thanks again for your help.Bill:)

Strumelia
@strumelia
13 years ago
2,129 posts
Bill, this book was written at a time when dulcimer 'tab' was not that common yet- and a higher percentage of players knew how to read music a little. This issue is one small drawback of this particular book.Here's how I figure it out:First I look at where it tells me what MODE the song is in for the book- In the beginning of the book there is an index of songs and their modes.For example, Aunt Rhodie is in ionian mode, Jean states there.Then I go to the song itself, and I look at the fret the song ends in. In this case, fret 3....thus confirming ionian mode.Now, if you happen to know that DAA tuning as an ionian tuning, you could just stop right there and tune to DAA and follow the fret numbers in Jean's tab and all will be well.

But say you want to know which ionian tuning she uses, or what key she has chosen?Well if you look closely at the song, on the left top of the song it says "Tune dulcimer..." and underneath that it gives three whole notes indicating the three notes to tune your three strings.The lowest note will be your bass string.Look at this chart: http://www.cyberfret.com/reading/converting-standard-notation-to-guitar-tablature/1st-position.html Ignore the guitar tab part, just look at the named notes on the music staff.Do you see the first C note, and where it is located on the staff of lines? You will see that Jean's BASS low note is on that same low line. So Jean is tuning her bass string to C. Jean's other two notes she writes un er (Tune dulcimer..." are G notes, if you look at the note chart and compare. Thus, jean is tuning her dulcimer to DGG, which is the typical ionian tuning for the key of C.If you print that note chart out, it can help you figure things out when confronted by these frustrating mysteries.Another example is Shady Grove in jean's book. She states in the song list that it's aeolian.Then look at where she places the low bass string under 'tune dulcimer', and look at the note chart- it's a C note again. Then look at her middle string indication under 'tune dulcimer' (the note in the middle)- again it's a G. Now look at her highest note for tuning the strings, and look at the lower chart to find it- it's a B flat (flat is the little "b" indication).So, for shady grove, Jean is tuning C-G-b flat.CGb-flat is the key of C version of what we usually see for aeolian key of D....D-A-C tuning. All strings are simply one whole step down from DAC, and going from key of D to key of C.Again, just knowing that she tabs it in aeolian mode from the first Song List at the beginning of the book would then tell you you can simply tune in any aeolian tuning, such as DAC, and be able to play the same tab and same tab numbers.I know this sounds complicated, but the notation charts can help you determine what some notes are.

Bill Lewis
@bill-lewis
13 years ago
48 posts
I have a question on to play the tunes in this book. How do you know what tuning the songs are in? Am i missing something when i look at the tune? I look at it and i see the timing, melody noter position and so forth. I do not read music but for the life of me i cannot figure out what tunings the tunes are in. I read thru the book and don't see it, or is it there and I'm missing it? Thanks for you help.Bill

Robin Thompson
@robin-thompson
14 years ago
1,344 posts
I dare you to write that tab book on Locrian mode tunes, Lisa! :-)Jean Ritchie's Traditional Mountain Dulcimer and instructional CD from Homespun Tapes is also a treasure. I can't even tell you how many times I've listened to parts of that CD.

Strumelia
@strumelia
14 years ago
2,129 posts
Maybe I'll purposely write a tab book on Locrian mode tunes for dulcimer.Hmmmm.....might be a bit short. But then again I like challenges! LOL

Rod Westerfield
@rod-westerfield
14 years ago
109 posts
Yep.. today I'd say 80% maybe more are in DAd, back then most were in CGG... oh changes whats next ..lol

Strumelia
@strumelia
14 years ago
2,129 posts
Oh, I see what you mean now- sorry! you mean that in the 70's there were a lot more dulcimer books written for ionian rather than mixolydian, like today's majority are in. Yes, I agree. :)For a rather obscure instrument, it never ceases to amaze me how many tab/instructional books there actually have been written for MD.

Rod Westerfield
@rod-westerfield
14 years ago
109 posts
Actually I meant the other books not hers...

Strumelia
@strumelia
14 years ago
2,129 posts
Though one might easily assume that, actually the tabs in her book are in the following modes/tunings:5 mixolydian songs, 3 aeolian, 4 ionian, 2 dorian, and 2 phrygian.Then of course other chapters are on dulcimer history, playing chords, harmony, etc. :)

Rod Westerfield
@rod-westerfield
14 years ago
109 posts
It is a cool book... I just a couple months ago found it and many other of my books that I had bought in the late 70's..neat stuff imagine this a lot of tabs are in Ionian...hmmmm..LOL

Strumelia
@strumelia
14 years ago
2,129 posts
It's an oldie but a goodie!Every time I open it I learn something new, year after year. Jean has a way of explaining things well in simple terms. Has a nice selection of simple folk tunes to play in different modes, some fascinating history and wonderful photos. It includes chord playing, noter playing, harmony playing, and finger picking styles too.You can often find very inexpensive used copies on Amazon or Ebay. 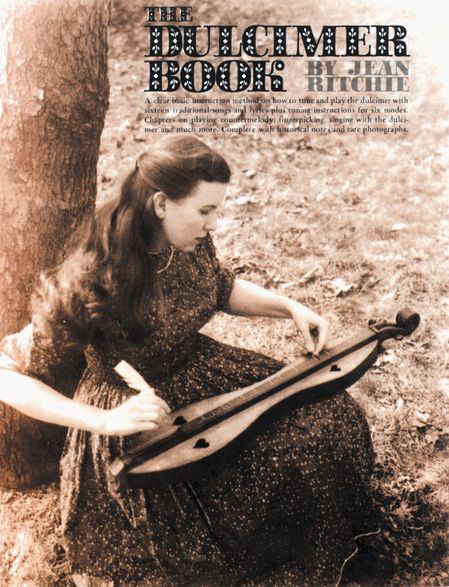