Does anyone else hear a tune in their head and have to pick it out on the melody and middle string?

Pick it out and if you mess up you might just accidentally make a song :)

No rush, Don.  Just enjoy yourself, but feel free to reach out if any questions pop up.

Don Grundy
@don-grundy
3 years ago
191 posts
I won’t have an opportunity to do much this evening.
Tomorrow we’re mowing and then have a 2nd grade granddaughter while her sisters play on the high school softball team. Five grandkids within 5 minutes of the house is a mixed blessing some days.

Contact me by personal message, Don, if you have more questions on this stuff.

By the way, in explaining things to you, I've made a further change in the tab.

In measure 2, instead of getting the F# on the 2nd fret of the melody string, I will now indicate it as the 5th fret of the middle string. So I would use my ring finger on the 2 at the end of the 1st measure and then slide that finger up to 4 for the second measure, leaving my middle finger ready for the 5 on the middle string.   That way the move up happens a little earlier, but it involves the same finger on the same string just sliding up two frets and then the hand is in perfect position for the next two measures.

Don Grundy
@don-grundy
3 years ago
191 posts
Thank you dusty, I’ll have to print this and read it more than once.

If you're looking for guidelines about when you would want to move to another string rather than stay on the string you are on, I think you have to examine the specific notes you are playing and your hand position.  In my playing I try to follow a few golden rules: 1) minimize left-hand movement; 2) moving from one chord position to another, try to keep at least one finger on the same string; and 3) keep your left hand in a chord position as much as possible.

If you are not playing chords, some of that won't mean much to you, but you should still understand the principles.  Let me address the question of when to shift to another string by looking at the first two lines of a tune I just tabbed out last night for my dulcimer club meeting this weekend. 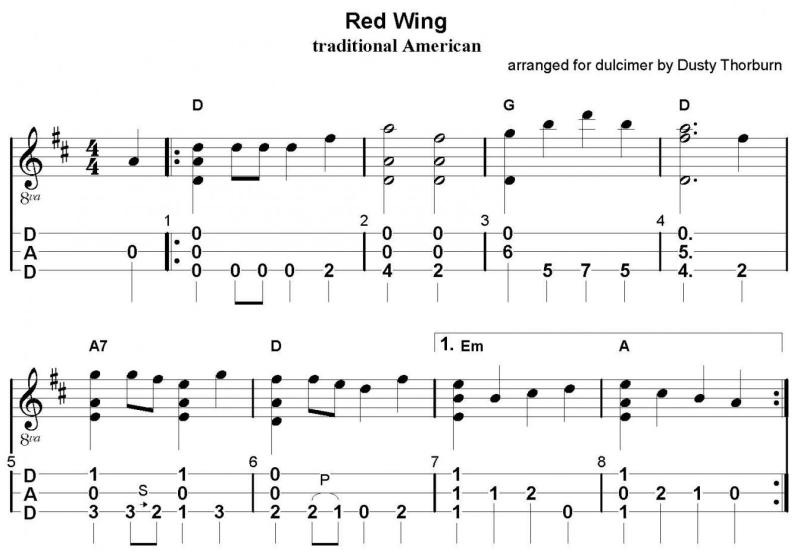 So by using the middle string for that one note, I am able to get almost two entire measures with my hand in the same position.

Obviously, there is no hard science to this stuff. You just try to figure out what will work best for you, meaning what will facilitate you finding the melody in the easiest way possible, with the least amount of movement.

GOT IT!  Is there a guideline to moving from string to string?

Don, @Strumelia's correct. A lot of people cannot pick out simple melodies on the dulcimer. If you can do that you are ahead of the curve.  Just keep working at it.

Don Grundy: I seldom progress past my single string play.

If you want to challenge yourself, try to pick out melodies going across the strings as well as up and down a single string.  If you are tuned DAd, just add 3 to the fret on the melody string and you'll find that same note on the middle string.

Obviously, drone players will always stay on the melody string. But those of us who include chords in our playing try to minimize our hand movement.  Learning to find portions of the melody on the other strings will help you achieve that goal.

Being able to pick out a tune on your instrument is an ability that many folks wish they could develop.  Just saying!   :)

No need to be embarrassed.  That's how you learn an instrument.  I still have trouble playing from tab but generally get a tune in my head and then find it on the fretboard.  Sometimes if I have trouble with a spot or two, I'll turn to tablature to see how someone else plays the tune, but then I just go back to the instrument.

Does anyone else hear a tune in their head and have to pick it out on the melody and middle string?