Hello friends, Does anyone know much about John D. Tignor dulcimers??

Great sound.  Tignor's are very underrated.  Hope to take both of mine in the studio this year and record using them.

Samples of my Tignor

That's the first Tignor teardrop I have seen.  Very nice.  I have an early 70's small hour glass. Yes post a sound sample.

Beautiful teardrop Tignor.  I have 2 hourglass Tignors, one with the small body style and one with the later, larger body style.  I love them both, especially the larger one.  You need to post a sound or video file of you playing it.  I'd love to hear it sing.

Your friend did a very nice job of  restoring the instrument. It looks good. I trust that you are enjoying playing it. Thanks for sharing.

I'm new to this forum and was told about this site because I Wanted information about my Tignor dulcimer.

My mother bought it at an auction a few years ago for $1. It was in bad shape, unplayable! The string alley was proven, tuning pegs (wooden friction pegs) were broken, coming apart at the seams, and no saddle.  A friend of mine worked on it for me to get it back together and now playable. 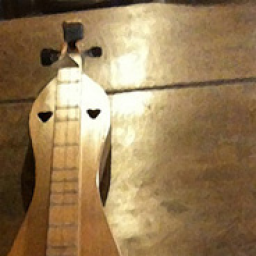 My John Tignor, with geared tuners replacing the hand-carved ones (which were saved, however....but at the time of purchase, I was not considering the historic nature of the instrument--I just wanted something more playable and I like the way it looked and sounded.  Note how dark the cherry has turned over the past 40 years!  Still sounds lovely and I like the workmanship and details like violin sides and trefoil sound holes.  The VSL on mine is 28".  Purchased 2012 at the Folk Shop in Tucson, AZ.

"Use what talents you possess; the woods would be very silent if no birds sang there except those that sang best." Henry Van Dyke
updated by @jan-potts: 03/29/16 09:37:28PM

I have an early 70's Tignor , made of Cherry ful frets. It is a fine noter player,but, chording is not out of the question. Yes John had his own scale, and it doesn't match any JI scale I have tried. He started building the larger dulcimers late 70's ,due to pressure from the buying public. Rob Lackey a member here has a couple of John's dulcimers, a small one and a large one. You should talk with him.  John's dulcimers play and sound as sweet as they come. He wasn't the finest wood worker ,but, I like what he created.

George,  I have 2 John D Tignor's, 1 large one and 1 old Cumberland (Ralph Lee Smith's term.)  The one on Ebay is a very large one.  Tignor changed his fretting as time went by.  Most of the large ones are ET.  The workmanship is superb on both.  I really think that big one is a little too high.

"Wasp waist" refers to a narrower than usual waist, because the wasp has a notoriously narrow waist between its thorax and abdomen, compared to say the honey bee.

John had his own scale. Early models mostly set for DAA play; some of the late models were set for DAd play. As for JI or ET? Again it was "his" scale and was set for noter play. Don't look to play chord style on it, it is not made for contemporary playing. John used a pocket knife to carve his tuning pegs. If you look close you can see the tool marks left from it! They may or may not adjust easily as there is a curve to learning to use wooden pegs made more difficult with his craftsmanship. As for bio:

Born in 1922 near Hindman, Kentucky, John Tignor attended the Hindman Settlement School where he was introduced to Jethro Amburgey, the Industrial Arts teacher. John attended Berea College from 1947 until his graduation in 1950. It is around this time that Mr. Tignor began to make dulcimers. His wife Sally had a Jethro Amburgey-made dulcimer that had become damaged beyond repair so Mr. Tignor decided to make her a new one as a gift. With a few minor adjustments, Mr. Tignor followed Amburgey’s design, adding internal supports and changing from the traditional heart to a trefoil design for the sound holes. Mr. Tignor was more concerned with practicality than beauty, so he left many parts of the instrument unfinished (from a woodworker’s prospective). Mr. Tignor continued to make instruments until his passing in 1982. Though not as prolific as some, he is in a direct line of notable dulcimer makers from Ed Thomas, through Jethro Amburgey, to Mr. Tignor himself. This piece was made in the late 1970’s. The early models closely resembled the Thomas design but the later pieces were much deeper and the shape is described as “wasp” waist. John also started using guitar frets instead of the traditional staples but continued to use the wooden friction pegs. The later models also had a hollow fret board.

Just me feeding my obsession with older vintage dulcimers, especially the wood friction pegs types. Can any one tell me anything about him, I have seen some info on line but always appreciate all y'alls input. Were they JI or ET fretted? I have read that they were "larger" dulcimers also. Any feedback from all of you who know way more than me would be great!!

Have seen the term "wasp waist" used in describing, is that a reference to the what looks to be narrow area between the upper and lower bouts?

Haven't bought it yet, but seriously considering it, and an opinion of what it may be worth? I know it's only worth what one is willing to pay, but among those of us who appreciate dulcimers on a higher level!!

Thanks, George in Estes Park Colorado.