Now that I've learned how to embed a pic into my post (thank you Strumelia), and I didn't post a pic of my new McSpadden earlier, here you go! Still lovin' it! 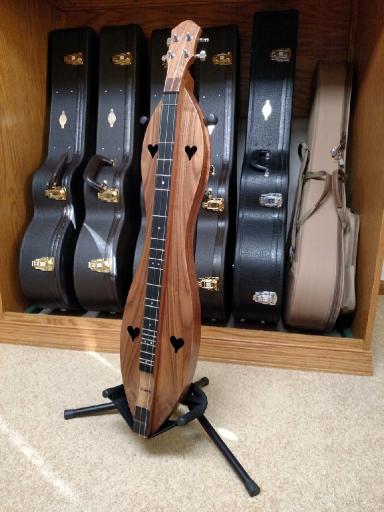 I've moved this thread to our "Instruments- specific features, luthiers, etc" forum since it will be helpful to others seeking shorter scale/vsl McSpaddens in the future.  I also removed a few posts that were veering into different directions in a non-constructive way.  Thanks, and carry on!

Although there is no excuse for poor workmanship, dulcimers are unique among string instruments in that they have two popular fretting setups. Old time traditional dulcimers are fretted in Just intonation. This setup is ideal for 155 tuning like Daa but won't play in tune in ddaD. Equal tempered setups are like guitars etc. And will play in 158 like ddaD and don't sound as well in 155. Before you toss your dulcimer be sure you know which setup you have... Robert

Susie
@susie
3 years ago
435 posts
Bridge:
I returned a dulcimer made by someone you would all know that just was not right.

I agree, I've had quite a few dulcimers from other builders who missed the mark on intonation. They needed to go to new homes. I'm very particular about the tone and intonation of an instrument. I have 4 dulcimers now that are all excellent that will be keepers.

Terry Wilson
@terry-wilson
3 years ago
295 posts
I've owned dulcimers over the last 6 years, built by different builders. In the end, I sold them all, except my McSpadden. It was the only one that was just perfect, in a higher octave, beginning at 7. Perfection.


Susie: I also have been playing guitar for quite some time (finger pickin' for 45 years). I know the importance of spot on intonation. It really bugs me when builders fall short on intonation. McSpadden gets it right.

Essentially through dumb luck and what came up for sale on the local CL, I ended up with a pristine McSpadden M12W that had been in a case in a closet for 27 years. The intonation is dead on up the frets and from string to string. I don't really know why because there's no sign of any extra compensation tweaks. It's textbook. I returned a dulcimer made by someone you would all know that just was not right. I had bought it used from Guitar Center with the 45-day return option, so it wasn't a case where the original luthier could set things right, perhaps with a different instrument. It's a current model that sells for about $300 with soft case, and it just was not right. Why the McSpadden is so spot on, I just don't know, but I had read that their build quality is extremely consistent from instrument to instrument. I'm on a budget, and I feel very fortunate that this M12W fell into my lap at a good price. It's a pleasure to play.

Susie
@susie
3 years ago
435 posts
I also have been playing guitar for quite some time (finger pickin' for 45 years). I know the importance of spot on intonation. It really bugs me when builders fall short on intonation. McSpadden gets it right.

Just an added note regarding short VSL instruments. In general, intonation is harder to get spot on as you shorten the string length because anything that's "off" about the instrument (perhaps the accuracy of fret positions) represents a large percentage of the whole and gets magnified. For example, it's much easier to have perfect intonation on a baritone ukulele than it is on a soprano uke. You can definitely get intonation spot on if you are willing to do what needs to be done. On some saddles (at the bridge) you will see them shaped so that each string has a slightly different VSL. On electric guitars, there are small sliding string carriers that can be minutely adjusted. Often, you can just angle the bridge/saddle. On my McSpadden M12-W, the bridge is basically perpendicular to the strings. On the McSpadden 26" VSL, the bridge is at a distinct angle on the 4FH26WR pictured at their website. See pic below.

I'm new to dulcimers, but I have quite a bit of experience with short-scale guitars and alternate tunings. On guitars, when you go to a shorter scale, you end up increasing the string gauge to maintain proper intonation. When you go down in VSL, less string tension is required to maintain the same pitch. At some point, the string becomes floppy, sounds bad, and doesn't intonate well. If you keep the same VSL and go up in pitch, your string tension obviously goes up. If you want to go up in pitch and maintain the same string tension, you need to go to a lower string gauge. Just some examples.

Go to this string tension calculator provided by D'Addario and experiment. You can select a standard setup and then vary one or more factors and see the calculated results.

Many of us play guitar and almost all guitars are universality between 24.75" to 25.5" so transition is easy. Longer scales like 28 to 30" are great for ND but string tension is much greater.

Greater string tension limits a strings ability to vibrant, so a longer scale can actually sound poorer when tuned in D4.

I built a lot of dulcimers and there are many factors affecting tone and volume. First thing a builder learns is what they are and how to build them into a dulcimer. That's the fun part... Robert

I agree with you Dusty. I think the shorter vsl must have some effect on the volume and tone. That is why I talked to Jim Woods about it. He even said that, but it would be very slight and probably not even noticable to the player.  I'm happy with the end product. I guess my point was that if someone was considering going with the 26, they shouldn't be concerned with sound. It is still the nice, sweet, beautiful sound of a McSpadden.

I don't want to start a big debate here, but how could shortening the VSL not affect the volume?  Pluck an open string. Now fret it at the octave. You will clearly see that the longer string has a lot more volume than the shorter one.  Or if you think your finger (or noter) on the fretboard is what dampened the sound, fret a string at the first fret and pluck it. Then fret it at the 12th fret. Which is louder?

And even more than volume, shorter strings have less sustain.  On a well-made dulcimer such as the McSpadden you might not notice that if you play down near the nut and use a lot of open strings, but in the second octave it will be much more noticeable.

I am not saying any of this to dissuade people from getting dulcimers with shorter scale length, for my current go-to dulcimer has a mere 25" scale length.  It is a beautiful sounding instrument, and I made that choice for the same reason Susie did: the ease of playing chords.  But there seems to me no doubt that you sacrifice some volume and sustain as you move to shorter VSLs.

Glad you're happy with your new acquisition.  FWIW, changing just the VSL on a given size box will never affect the volume.

Thumbs up to McSpadden for offering their full sized dulcimer in a shorter 26 vsl. I spoke with Jim Woods about the 26. I was interested to hear if the shorter vsl resulted in a noticable loss of volume and if the tone changed, from their standard vsl. He said I wouldn't notice a difference in volume and there might be a very slight tone difference. I got my new McSpadden and am very happy with it. It is so close to the McSpadden I had a few years ago, but I love the shorter vsl for my chord/melody. I wanted it to be comparable to my Doug Berch and Folkcraft Custom vsl's.

I just wanted to say, if you're considering one, I give it five stars. You probably won't be disappointed.