Sweet sounds from that old guitar. I hope my modern guitar sounds that sweet when it get that old.

Dusty, you are a gold mine of info.

Robin, I didn't have a chance to listen to your clip until now- it sounds so rich and old style- really great.

Robin, that guitar sounds amazingly warm and mellow. You have certainly rescued a treasure.

And I'm impressed by your playing as well. I agree with Rob; you sound Jeffersonian, as in Blind Lemon.

There are a few good sources for that mix of hillbilly and race records that was common in the 20s and 30s. I have a CD of African-American fiddlers calledFiddler, Singthe Blues for Me, and there is a two-CD set called White Country Blues that is basically old "hillbilly" singers playing blues. There was a repertoire of acoustic blues music that was common to both white and black performers who, of course, listened to each other. As Rob says, the music was only separated by record company producers and marketing folk. And of course, that whole tradition of Piedmont Blues, which centers on fingerpicking and uses the standard 12-bar form much less frequently, was equally white and black. In fact, some of your playing could easily fit into that tradition.

That is one beautiful instrument, Lisa! I'd love to pluck a little on it!

My little parlor (US spelling!) guitar would have been originally steel strung. It is braced for steel strings and this is typical of the Oscar Schmidt guitars of this age.

There are some folks playing guitars of the 1800's in the Minstrel genre groups, they are amazing and lovely smaller parlor guitars, but must be kept tuned lower as the banjos also were low tuned during the 1800's. They were just not built to withstand modern high steel string tunings. Robin, your guitar was built a little later on, was yours originally strung with gut or steel strings, do you know?

This original 1850's Ashborn guitar is now strung in Nylgut (originally strung in gut), and is regularly played in lower-key minstrel style sessions:

Robin, I think the influence and "mixing" of Black & White music predates the recording industry. Indeed there are some (and I think I'm one of them,) who believe the recording industry is what separated the music. They recorded black artists and wanted blues for their "race records" division. There were a few black string bands who were recorded, but, for the most part, string band music was recorded for a white audience. The Mississippi Sheiks, Papa Charlie Jackson, Henry Thomas and Uncle Dave Macon have similar "sounds" on a lot of songs. I believe songs like "Keep My Skillet Good & Greasy," "Georgia Buck," "Pallet on the Floor," "Sandy Boys," "Reuben's Train" are representative of that tradition I like to call (as I read it somewhere) proto-blues: that common music of black and white which predates the recording industry. We play a lot of it in the old time music world, without thinking about it, or even without knowing it in some cases. The recording industry and early record producers have done any of us interested in the history of "folk" music a disservice by dividing up music along racial lines. Wouldn't you love to have a black fiddler's rendition of "Turkey in the Straw" from about 1920?

Rob - I have a lots of old blues tracks on various CDs but really haven't listened to them for quite a while - I sort of moved into old time and bluegrass. Perhaps I should fire up a few tunes by the old blues masters and have a listen again. There wasquite a swirling mix of music in the southern Appalachians around the 20s with influences of the blues coming in to 'hillbilly' music.

Just out of interest - I've fitted a set of heritage strings to the guitarthat are made by Newtone Strings in Derbyshire. I know Malcolm Newton and often chat to him on the phone as I order about 1000 strings from him each year for my guitars! The heritage sets have thinner round core wires and so come up to pitch at a lower tension. Hopefully my little parlour guitar's neck will appreciate the lower tension and stay stable without warping for a good few years! Here is a link to Newtone Strings.

As a listener, player and researcher in early country blues, I'd say that was either Blind Lemon Clark or Barbeque Robin on a 6 string. Seriously, Robin, that's a great sounding instrument and you play it well. I've been hoping to rescue one of those myself, but haven't found one cheap enough that is restorable. Most that I find are warped quite badly. That's great 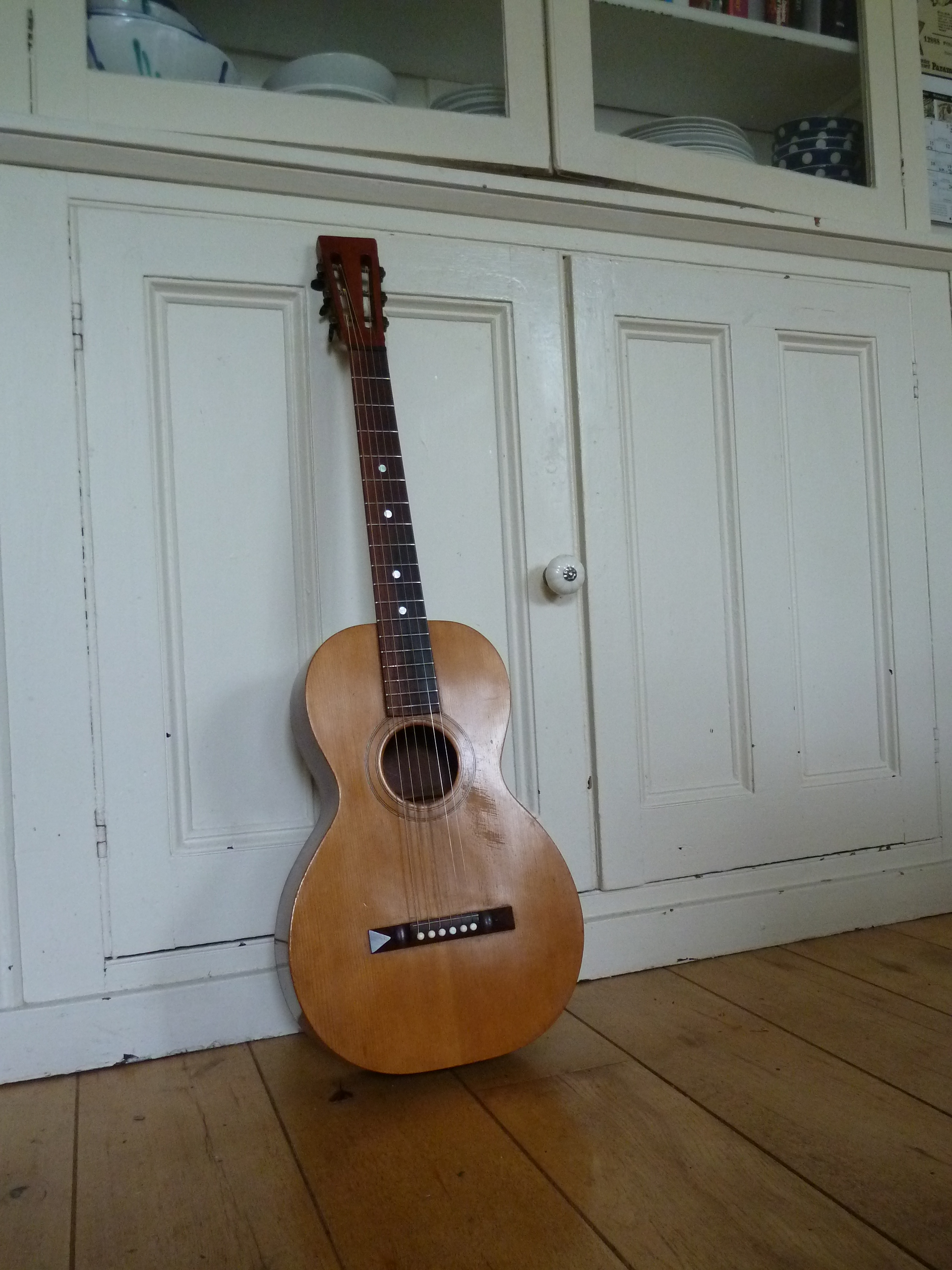 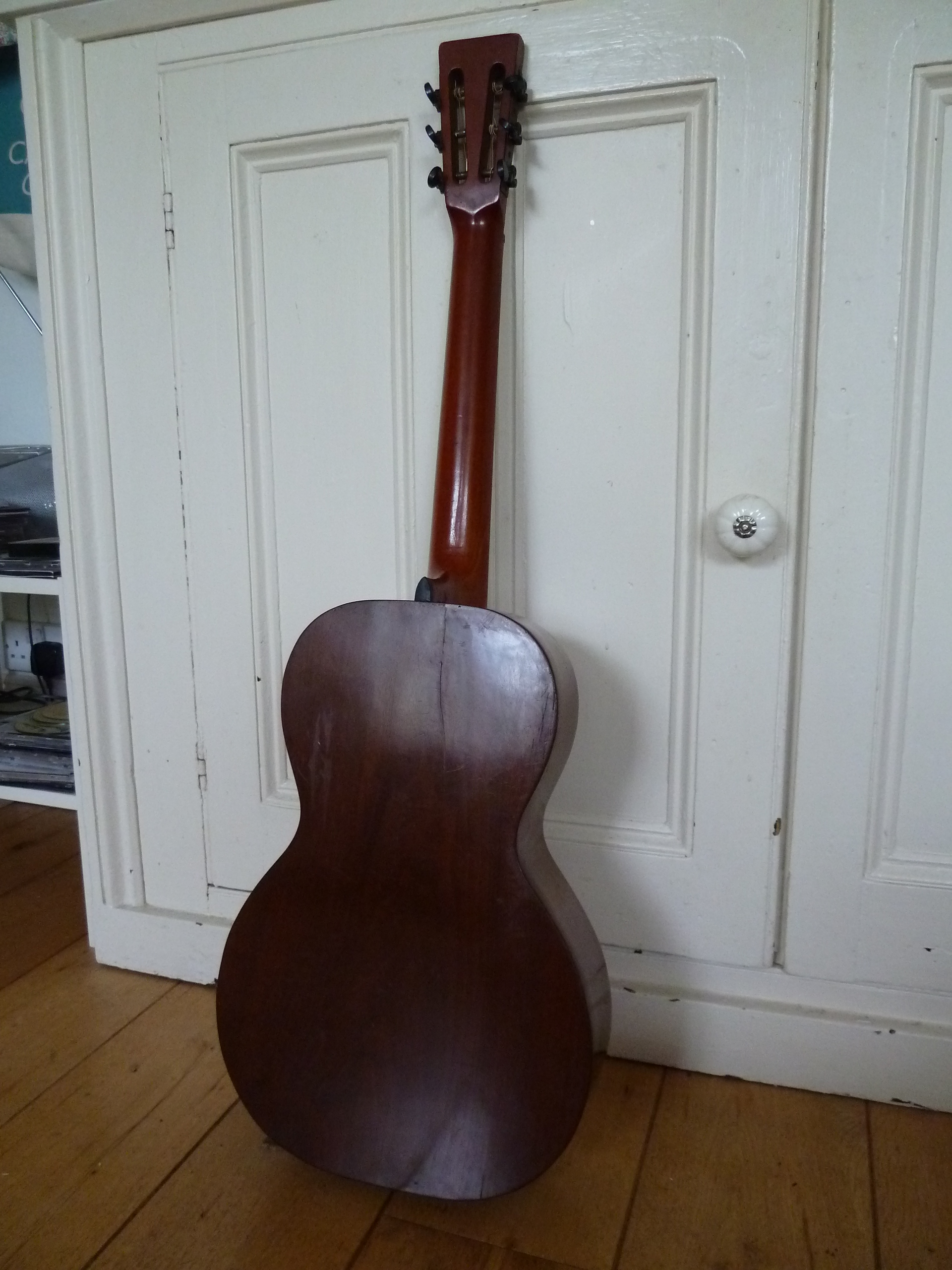 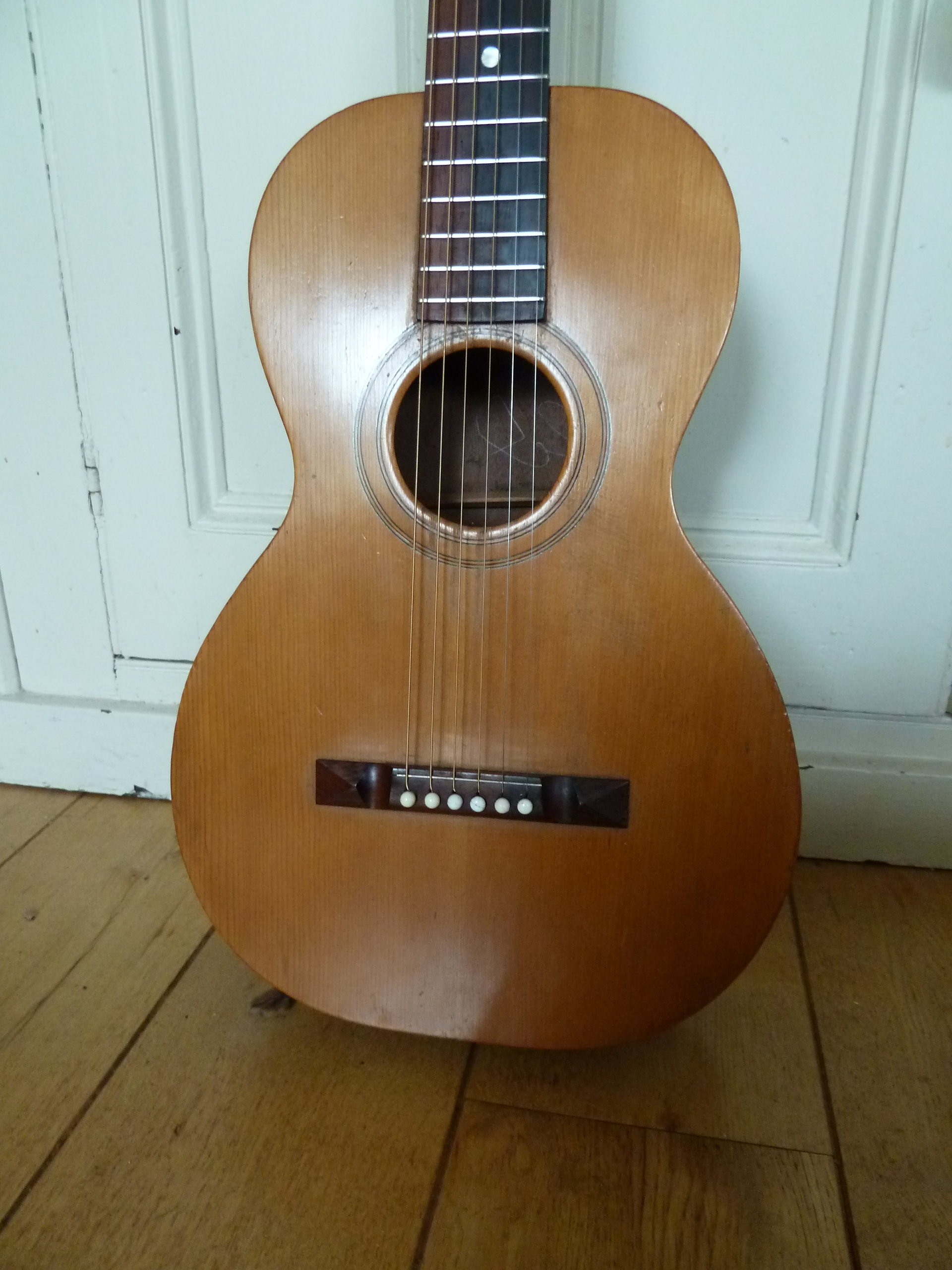 ). A friend of mine took it to bits (not difficult as it was in bits!) and has put it back together. It is an incredibly light guitar with mahogany back, sides and neck and spruce top, the top and back are ladder braced. The neck is a lovely 20s thick C profile with no truss rod and the tuners are the old 'reversed' style (giving a clue to the date). Although the instrument has no label left inside a lot of research bought us to the conclude it is indeed from the Oscar Schmidt factory - the bridge shoulders being the significant marker.

It is a really lovely little instrument to play and from the pick marks on the body it has seen some good use over the years. It is not a valuable instrument or collector's item but rather a simple player's delight. She has a wonderful voice and, whilst I'm not any sort ofguitar player at all, I am enjoying finding my way around the fretboard of this great little instrument. I haven't picked up a guitar for the simple enjoyment of playing for years although I handle them every day for my job, which I suppose is why I don't play guitar anymore!!!!!! Anyway, perhaps this instrument will rekindle my interest. Here is a little soundclip of the beauty that I've just recorded.