You're welcome, John. I've seen a few Tignor dulcimers over the years. I, too, was struck by the narrow waist and wide lower bout as well as the depth and the large pegs.

Thanks, Ken! I remember seeing John's dulcimers at a shopping mall and being blown away by the depth, the width, and the wasp-waist on those critters!  I taught a young girl how to play one, and it was nearly as big as she was!

This website has a nice photo of a Tignor dulcimer from the tip of the peg head to the end of the tailpiece. A mountain dulcimer does not have a neck. https://www.worthpoint.com/worthopedia/1970s-appalachian-mountain-dulcimer-1904007493

Yes I'd say they were old Grover planet banjo tuners. Probably previously used. Not the highest quality of planetary tuners, being 2:1 ratio.

John, I like what you did in fabricating those wooden pegs.  Personally, I prefer more of paddle shape for grips but if your fine efforts replicate an original pattern I'd opt for the same.

While your peg refit is aesthetically more pleasing than the "as found" set-up, I find those mechanical tuners quite intriguing. I've never seen anything quite like them.  While I wouldn't call myself an expert on mechanical key designs, I have done more than a little research into what's out there.  They definitely have an "old-timely" look.  Maybe your photos don't tell the whole story, but to say the mechanical tuners were "inexpertly mounted" may be a disservice.  After all, they were installed such that re-conversion to violin style pegs was pretty straightforward.  It is possible that they were installed by the maker - notwithstanding the "drilled through" peg box.  A number of builders employ drilled through peg boxes even though the finished product ends up with mechanical friction or geared tuners (e.g. McSpadden, May etc.).  I would definitely keep those unmounted mechanical tuners with the instrument as part of its provenance and availability for re-conversion should the owner not have the patience for violin-style friction pegs.

While I was glad to hear that the action was improved by simply deepening the string slots, I would hope that you did it with a 10 to 12 gauge melody string in mind because the high action could have simply been a matter of a 22+ gauge string in a 12 gauge cut - if you get my drift.

I really had to do a double-take on that string layout.  Namely the wider spacing between the melody string compared to the drones.  With that, and staples for frets, the builder apparently had optimizing noter/drone playing style in mind.  I'd probably go for a DAA string set with this.

Here are before and after photos of the Tignor pegs: 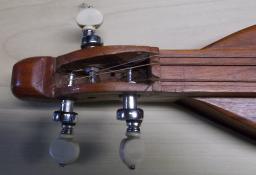 Did you standardize the taper?

Here are before and after photos of the Tignor pegs:

John and Jim, I'm glad to hear that both of these fixes worked.

Great story, Jim.  There are several ongoing mysteries about dulcimers and their builders.

I called the owner of the Tignor, and he said it would be OK for me to deepen the existing string slots, so I did, and it was a big improvement. That dulcimer sings sweetly now with a normal playing touch.  He has yet to pick it up from me, but I'm sure he'll love it now.  I'm sure the late John Tignor would approve as well.

Awhile back I bought this thin sided walnut teardrop. A pretty little piece but basically unplayable due to intonation issues (namely it got progressively sharper as you fretted higher up a string) and the string pressure required to fret was outrageous.  Clearly, the fixed bridge was way too tall.  The fit of the bridge in the fretboard was so exact and tight I elected not to try to remove it, but cut it down where it sat.  To do so I removed all but the middle string, then loosened the middle string such that I could pull it to the side of the bridge, moving it up and down to gauge how much material had to be removed (which was conservatively about a third of its height).  I removed the last string, then fashioned a hardwood shim to the height of where I wanted the bridge to be.  Laying the shim alongside the bridge I used it as a guide to carefully cut down the bridge with a fine hacksaw blade. I followed up with files and sandpaper to dress the new top of the bridge, then using the piece of bridge I cut off as a template, I cut new string slots.

I could hardly believe the result; the intonation is right up there with the best of my current crop of 8 dulcimers.  What baffles me is how the builder could have released a dulcimer, that overall was a really nice piece of work, with that crippling bridge.

One might argue my approach would reduce the collector value of a piece, but I consider it simple "set-up" that transformed a "wall hanger" into a quite playable instrument.

The photos below show the dulcimer "as received".

Sounds like you've got yourself a sticky situation there John. (Pun intended) The big problem with that glue is it expands as it cures so you have a very tight fit. You might try knocking it out from the side, but you risk damaging the slot if the glue bond does not break. I think I would try to either rout or saw it out and make a new nut. I know that is not easy to do and would require making some type of jig to do the job. Of course, if this is just going to be a wall hanger, you don't have to worry about any of this.

Well, Ken, at least it'll SMELL good, even if it doesn't loosen the glue!

Gorilla Glue company recommends razor blade/scraper for removing blobs from wood; but that won't help in a nut slot...   Citrus juice is suggested for removing from hands.  Try sponging OJ or grapefruit juice on it several times...

That sounds like the same sage advice I gave somebody here a few days ago!

Unfortunately the nut has been re-glued with what looks like Gorilla Glue... might be a job to remove.  Thanks, Dan!

Tignor got tired of fixin' his wifes Burgy so he decided he could make one better! Yes the early pieces would have been Burgy copies. I have no idea how the intonations on the early pieces were, but the bottom line is, do they want to play it or hang it on the wall? You could make new nut and bridge and save the originals?

A young couple came to my home yesterday with a beautiful old Tignor dulcimer that had some problems.  The fist thing I noticed is that it bore a striking resemblance to an Uncle Ed Thomas dulcimer.  I think John was a protege of Jethro Amburgey, wasn't he?  Anyway, I brought my latest Thomas upstairs and laid it next to their dulcimer.  Apart from the Tignor being a couple inches longer and slightly wider, they looked like twins.

The 3 tuners on it were shabby-looking planetary models, inexpertly mounted by somebody, and all 3 strings were the wound steel ones we use just for bass drones.  I found reference photos of what Tignor pegs should look like, and set about to reproduce them in old-growth black walnut.  They came out very well.  I then went to string the dulcimer with the proper gauge strings, when I noticed the "mile-high" action.  The tone is nice, but pushing the melody string all the way down to the staple fret really stretches it out of tune!  I'm not sure if I should lower it or leave it as-is.  Any thoughts, my fellow historical luthiers?