Thanks for the offer Jan. Like I said, I'm just curious and not that curious to really put you to all that work of tracing the bridge. I knew Robert Hutchinson and played many North Country dulcimers at his booth during a couple of arts festivals. I think Buzz would be more interested in a tracing of the bridge it he is going to restore the North Country dulcimer which was the beginning of this thread.

Ken, I'd be happy to make a tracing for you and send it by snail mail.

That's a great picture,  Thanks Jan!

Thanks to Dusty and Strumelia as well

For those of you who were interested, here's a close-up of the North Country Dulcimer bridge. The strings lay in shallow grooves on the top edge. 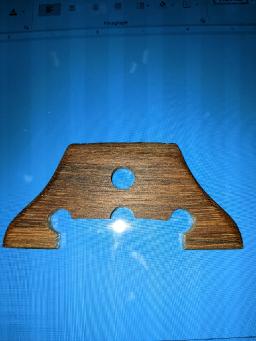 +Plus to what Dusty said, but with one added thought:

Usually hardwood bridges are preferred and give better tone. Violins and banjos most typically have maple bridges.
However, I found out that with early style banjos the best most resonant sound is achieved with softwood bridges like spruce, cedar, pine, etc. I was at an early banjo gathering once where a fellow was selling bridges made from many various woods, and it was suggested by more than one person that i try a softwood bridge. I tried many bridges that day and they were right- the evergreen ones gave a noticeably richer more resonant tone... which very much surprised me. I bought several and put them on my 3 early style banjos.
I can only guess it's a similar effect as when a dulcimer has a spruce, redwood, or cedar top- which is softer wood but gives a very mellow resonant tone. I should note that the early fretless banjos use nylgut strings rather than steel strings and this may have relevance, other things being equal.

So don't destroy that cedar bridge once you make a new hardwood one. Swap them back and forth and do a sound test!

Good for you, @Buzz!  The builders here might want to chime in, but I would guess the cigar box material is a softer wood (they were traditionally built of cedar), and you might want a harder material for a bridge.  You might consider using your cigar-box bridge as a template and making another out of a harder wood or bone or a hard plastic resin or something.  You will likely get a crisper sound.

That's a fine looking dulcimer, by the way.  Congrats!

Thanks to all members especially Ken and Jan for your help

Just a quick update for anyone interested. I made a temporary bridge out of an old cigar box. The dulcimer sounds BEAUTIFUL and well worth the effort. Here is the size that seems to work really well for future reference.

I will update as I go

Well, it took me a few days, but I finally logged on.  I will contact Buzz and let him know I can assist him.  Just in time, too.  I was just coming to a decision about what to do with this dulcimer.

I'm just mentioning @jan-potts so perhaps she'll get the notification and join this conversation directly.  Are your ears ringing, Jan?

That's a good find Skip. If you go to Paula, you can see some really good photos of the bridge. That is another person you can contact if you need someone to make a tracing of the bridge and measurements.

"The dulcimer sings a sweet song.

Thanks Susie. I might try to make my own bridge maybe even alter a cello or upright base bridge. I will let you know..

That looks like that could be the one Skip.

Your new dulcimer is beautiful! Keep us posted after you get it set up and are able to play. I bet it's got a nice voice too.

If you go to Jan Potts public page, there is a post by 'Paula' just below the photo [her thumb nail id icon] that looks like it is probably a photo of the bridge in question.

Thanks Ken I really appreciate your help

No problem, Buzz. Looks like you conquered it. Yep, that's a North Country Dulcimer alright. The place where the strings contact the bridge will be placed at twice the distance from the fret board side of the nut to the center of the 7th fret. Any good luthier or repair tech should know that. Jan Potts, one of our moderators has a photo of a North Country dulcimer here: https://fotmd.com/jan-potts/gallery/5753/mtn-dulcimer-by-robert-and-yvonne-hutchinson1984

Perhaps if you send her a message here she can shed more light on the bridge shape.

To send her a message, click on "Members" above. Put "Jan Potts" in the search window. When her page comes up click on "send message" just below her profile information on the left hand side of the page..

Thanks for the advice I am new to forums so I am having a little bit of an issue posting pics and replying to messages with my phone.Sorry.

Robert Hutchinson was the maker of North Country dulcimers in Bairdsford, PA. Besides making dulcimers, he was known also as "The Kazoo Guy."A He is no longer building. The bridges on his dulcimers were unique. You can find some photos on the dulcimers on the internet. You will need to have someone custom make a bridge for you. If you can find someone who has a North Country dulcimer who would be wiling to trace the bridge for you, then whoever makes a bridge for you would have a pattern to work from. It will take some work, but shouldn't be too difficult.

Hi, Buzz, Can you post a photo of the instrument, especially the section where you would strum? That would help us give an informed answer, as there are various different bridge styles.

First off I am a newby to this forum and dulcimers and if I am doing this post wrong please let me know. I ran across my first dulcimer at a thrift store and was amazed by the instrument as I have been playing guitar for many years and even played violin back in school for a few years. Anyway the dulcimer I was lucky to find is an hourglass 38 inch 4 string made by North Country Dulcimers built in 1985 according to the tag inside. My problem is that it is missing the bridge..It is a beautiful instrument and I really can't wait to give it a try. My question is where would I find a bridge and where the placement of the bridge should go. Any help would be much appreciated. Thanks in advance.