What a great looking place Ken. Why come back

Great photo too. just where Cezanne would have set up his easle, he liked a good mountain as a backdrop.

Any walnut there, couple of trees look right from the photo,

That was my first exposure to Mediterranean Mountain environment. Steep, thickly brush covered slopes, red clay. Bamboo and some of Robin's reed-type grasses along the river bottom. Most of the trees are smaller leaved varieties than we have in the States - more like Live Oak and Laurel Oak than Maple or Poplar. Interesting mix of hardwoods and scattered pines and cedars too. The finca has a couple feral orchards; one of cherries and one of olives, and a veggie garden in disuse. There's a metalworking shop to die for, and an equally well-equipped woodworking shop, and always has a bunch of projects on the fire, including a built-from-scratch small steam engine that's about 75% complete.

His nearest neighbors are a Brit couple in the mid 50s who bought a piece of the original finca from Dad about 10 years ago. They sort of look after him and help him with things.

Looks like some really nice country over there, Ken.

Sounds like quite a trip. I haven't been to Spain since 1971. Your photo makes me think that this area hasn't changed all that much....

OH this isbeautiful, I wish I lived over there with access to all those wonderful, historical places.

Very cool, Ken! And, yes, make it cooler by taking along a dulcimer next time.

Oh wow, so beautiful! Did you save any damsels in distress while you were there Ken?

I spent the last week as a Spanish hillbilly! My Lady Sally's father retired to Catalonia (a Spanish province) about 30 years ago (he turns 90 in March), and Sally goes twice a year for a week to visit him on his finca (think farm or homestead). Brits seem to retire to Spain the way New Yorkers retire to Florida, and for much the same reasons. This time I got to go along and meet him for the first time.

He lives about 30 miles up a dirt mountain track from the village of Llado, which is in turn some 20 miles from the town of Figueres (where Salvador Dali lived). In another direction he's only about 30 miles over a mountain from the Mediterranean and France. The finca is now only about 18 hectares (think 40 acres), although it was once much larger.

Although there is piped water, his only electricity is a mix of 12 volt solar panel/battery and a gas-fired generator if/when he decides to fire it up. He is not computer literate or interested in them. The nearest occasional access is a neighbor, about a mile away but they were only home one day while we were there.

The main house and outbuildings are, as you can see, stone, and have been built, re-built, and added to over the years. Goats and sheep and horses and 'javelin' (wild boar) roam the property and the valley in general (I got to help cut down on the size of the sounder of pigs that inhabit the valley).

We were gone just a week, flying in and out of Barcelona. In some ways it felt like forever, and it some it was far too short. Next time I will take a dulcimer. 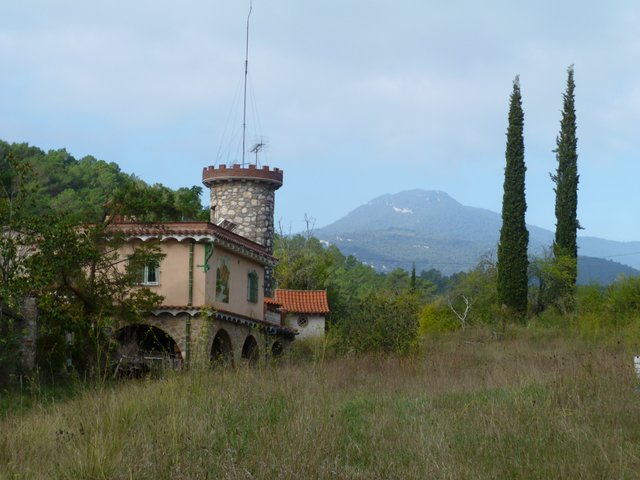