Any body have an idea what this is ?

Forums » Discussions » Adventures with 'other' instruments... » Page » Any body have an idea what this is ?

Thanks for all the helpful information. The pictures you posted do look remarkably similar to my device. The only difference is the bridge arrangement.

Thanks to you and everyone for your replies. I think judging from the amount of dust I extracted from the sound box Lisa is right about the vintage !!

Trapezoid shaped dulcimers dulcimers have been made for decades, though they're not as commonly produced as curve sided dulcimers. If I had to guess, Mick's used homemade dulcimer looks to be maybe from the 1970s or 80s. Yes Robin Clark made a few box dulcimers, but only within the past several years.

Didn't Robin Clark up in Wales do some trapezoid dulcimers?

Mick, here is a link to article by Jerry Rockwell on the Bear Meadows Dulcimer site: https://www.bearmeadow.com/smi/rockwell.htm  . If you scroll down to near the end of the article, there information about tuning.

I hope this helps you.

In a book by Reader's Digest many years ago there were plans for a dulcimer similar to your. The book is titled Back to Basics. Here is a phot of the article and a photo of a similar dulcimer.

Thanks Strumela for the comment. Well I never thought I'd find a used Appalachian dulcimer on my doorstop. Only cost a few pounds as well.

One of the defining features of a mountain dulcimer is that it has a raised fret board that runs down the middle of the body. Epinettes, scheitholts, langeliks, langspils, and hummels (all of which are considered to be more or less ancestors of the American mtn dulcimer) all have frets and/or raised fret boards that run along one side/edge of the instrument, the side nearest the player.
I agree with Ken L that this is technically an Appalachian dulcimer. This trapezoidal shape has been used on other mtn dulcimers, btw.

Thanks for the link. I had wondered about those as well, but so difficult to be certain.

Thank you so much for the comment. I am surprised , but I'm old enough to appreciate experience. Thats wonderful and I'll tidy it up and restring it. I may even try to record it and see what you think.

The look reminds me on epinettes but since they are basically in the same class as dulcimers that doesn't need to mean anything: https://en.wikipedia.org/wiki/Epinette_des_Vosges

Hi, Mick. I knew you are in the UK. You have a 5 string dulcimer then. They are usually strung as a doubled melody (strings closest to you), a single middle string, and a doubled bass with doubles an octave apart. There are many mountain dulcimers built in the shape of yours. The instrument is diatonically fretted; no 6 1/2 fret.  For a 23 inch VSL I recommend 0.012 size string for d, 0.016 for A, and 0.024 for the bass D. You can string it as a 3 string dulcimer by leaving off one string each of the pairs. I don't know what tuning you plan to use or how you plan to play, but here are some possible tunings.

Of course you can also tune to G using C and G as the notes.

Hi Ken ,Thanks for prompt response, but I perhaps should add a bit more info as my picture doesn't show the full story. I should have noticed that before. There are a further 2 tuning pegs on the other side of the headstock. So its 5 strings. The fretboard doesn't go the full length of the body. The total length is 29 inches and the depth of the fretboard is a quarter of an inch.

The body is slightly triangular in shape. Nut to bridge is 23 inches.

I'm too new to be categoric but I don't think its an Appalachian dulcimer. Maybe I should add I'm in the UK so it might be European.

Mick, you have a mountain or Appalachian dulcimer. It looks like it is a three string model. It should be strung with bass string (wound) in the slot farthest from the player. A string in the middle of the fret board and either a single or double string in the slots closest to the player. Standard tunings are DAdd or DAA.

To determine what string should be on your dulcimer we need to know the vibrating string length (VSL). This is the distance from the inside of the nut (fret board side) to where the strings first touch the bridge.

I have attached a photo which I hope illustrates an instrument I picked up in a local secondhand shop. As you can see the fretboard is in the centre. It has 19 frets with a single string in the middle with pairs spaced away from it on either side. One string in the right hand pair is wound the rest are single steel wires.

I will give you the note readings on the middle string which I tuned to an open D.

So at first fret E then F, F#,G,G#,A,B,C,C#,D,E,F#,G,G#,A,B,C#,D,E The bridge sits a little high so the strings slope over the fret board rather than parallel, but I assume this was not intended.

Does anyone know what it is ? I thought it could be an Epinette or Scheitholt but it doesn't seem to fall into what I would expect

Any guesses would help !!! 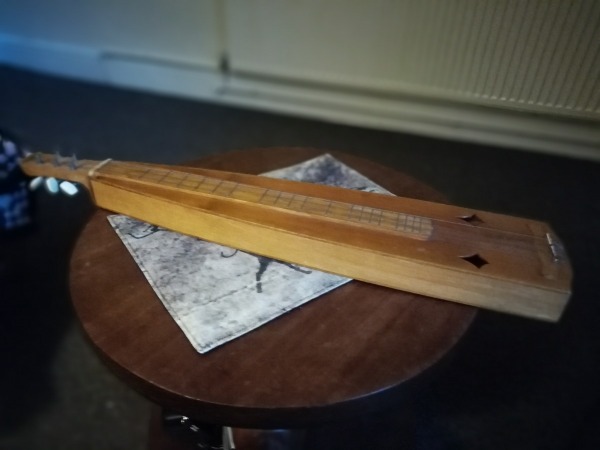