That is so pretty! I can't wait to hear yours.

They're pretty cool at FOTMG, but we're MUCH cooler at FOTMD!

Wow, I just joined FOTMG yesterday and I'm truly amazed and see that is a very special group of people!

Wow, I just joined FOTMG yesterday and I'm truly amazed and see that is a very special group of people!

Val and Brian- wonderful sentiments and thoughts- they really hit home and are so true.

John Henry, I plan to get in a little epinette practice this afternoon- after I work on some machinery valve drawings for a few hours (um, gotta make a living too!). It's an exciting new challenge for me, since I think I need to develop a new method of 'attack' more in keeping with its epinette-ish charms.

What a fantastic gift and thank you from John Henry. I realized right away that this was a very special community of people as soon as I joined, and this gift to you is, in one sense, a gift to all of us. Thank you, Stumelia, for making such a great place available to us, and thank you, John, for this wonderful example of generosity and kindness.

Best wishes to all for a wonderful new year.

Thanks folks, this site (and the people on it) has provided me with a lot of pleasure these last two years, impossible to 'shake everyone's hand' so to speak, so something made from reclaimed timber to the originator of FOTMD hopefully fits the bill, particularly if she shares it with us all, lol !

Lovely! What a fun surprise :)

If that don't prove there is a Santa Claus, what will? His spirit moves people to do special things, even if you don't see him. The story is almost as much fun as the gift, ain't it?

It is a lovely instrument, Lisa, and am sure that Sheba even gave it two paws up.

Wayne, Sheba wants nothing to do with it! lol!

I've been experimenting today, and it's obvious that this little charmer needs a lighter touch than my usual heavy handed Galax-ish power-strums, which might send it flying across the room...

So I've decided to try to re-learn a bit of finger-picking again- which I have not done since about 15 years ago...!!

I'm very glad now that I took a one hour class in beginner fingerpicking a year and a half ago from Nina Zanetti who was teaching at a local dulcimer fest I went to.

That one class, along with my old Sue Carpenter fingerpicking book, and FlintHill's Travis-picking videos here on fotmd, will surely help me re-learn this skill that I have forgotten long ago. I dug out my old fingerpicks that were stored away for years.

This will be FUN!! And challenging...so don't expect any immediate videos until I get at least a very simple beginner tune under my belt. It will take a little time...I have to relearn all the moves and it will take a couple weeks at least I'm sure. But I'm determined to do it, partly because I have seen how beautifully John Henry played this instrument.

What a great gift for the Queen Bee of FOTMD. When are we going to hear it sign, Lisa?

John, very thoughtful of you.

Such a wonderful gift and I visited some of the tunes I had not heard John Henry play earlier...thanks for making the references...but what a lovely tribute you made to his gift with those beautiful photographs. Stunning!

I did indeed wait until Christmas morning to open the package! It was a real surprise because the shipping tube looked like it might contain a mouth bow or a violin bow or something- there is NO WAY an epinette could have fit into a cardboard shipping tube that slender....and yet it did! Even now I would never imagine it could fit back into that tube. I was totally amazed.

Benjamin- yes, I do feel very blessed in so many ways...and very grateful too.

Bobby, John Henry has special powers-- he would've known if Strumelia had opened that package!

Strumelia, I don't have to tell you you've got a treasure. And John Henry is a jewel.

--
Robin T
one of the Moderators here :)
Keep a song in your heart!

Wow that is a special gift! Awesome

One of the things I love about our little community here is how John Henry has endeared himself...to all of us.....

That is really cool! John Henry has outdone himself, but I can't imagine a more worthy recipient. Congratulations on your wonderful surprise!

What a wonderful gift. You are so blessed.

Well I just have to relate the extra special Christmas gift I received this morning...

About 10 days ago a Mystery Package arrived in the mail for me, a long thin sturdy mailing tube with no return address except for a rather cryptic customs stamp and the name "Musical Novelties Company". It also had a warning to not open til Dec 25th, so I just had to wait, wondering.

The generosity and thoughtfulness that went into this gift is overwhelming. I'm still not quite sure it's really real! I hope I will be able to do it justice.

Fotmd member John Henry sent me an epinette des Vosges that he made. !!

He remembered how I had talked of wanting to get an epinette a year or so back, and he knew I admired his skills in both making and playing his own epinettes. How incredibly kind and sweet of him to send such a wonderful gift. It's hard to express how delighted, amazed, and humbled I feel. But I know I will enjoy learning to play some simple folk tunes and hymns on it, and it is already cherished. I will definitely post a video of my humble attempts on it in a week or two once I get used to playing it...though I cannot hope to play it as skillfully as John Henry has in his videos! But I'll play it in my own way as best I can!

It's so dainty , I've never played such a pretty little dulcimer-thing before!

Despite it's diminutive size, it has a very resonant bright voice- it really really makes me think of sleigh bells jingling through the cold sparkling crisp snow. So festive and cheerful! I feel like i'm in a Dickens story, receiving such a lovely gift. So unexpected.

John Henry, I just don't have adequate words to thank you for this precious instrument.

Here is our kitty Sheba and also myself getting to know our beautiful new epinette des Vosges this Christmas morning 2011!: 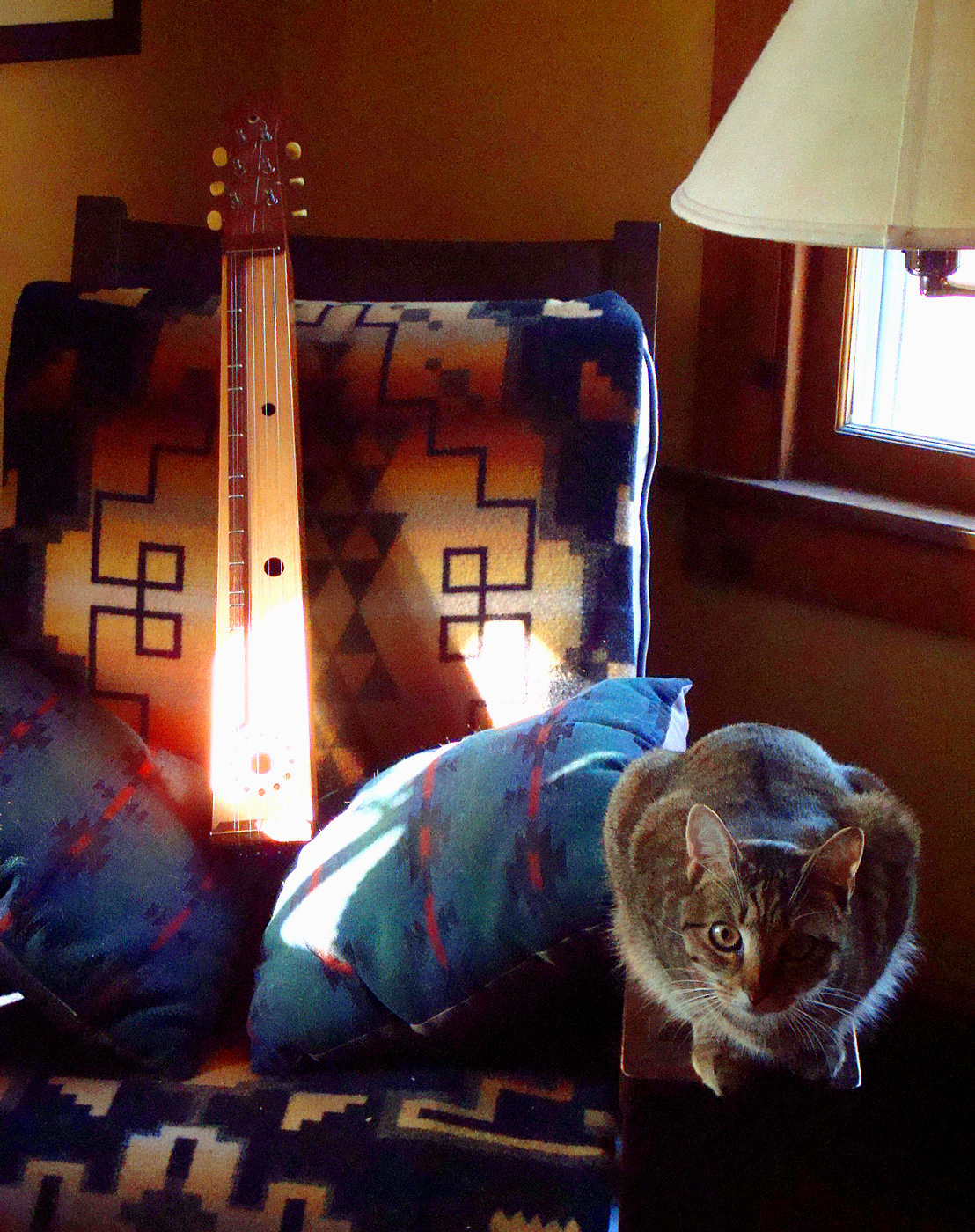 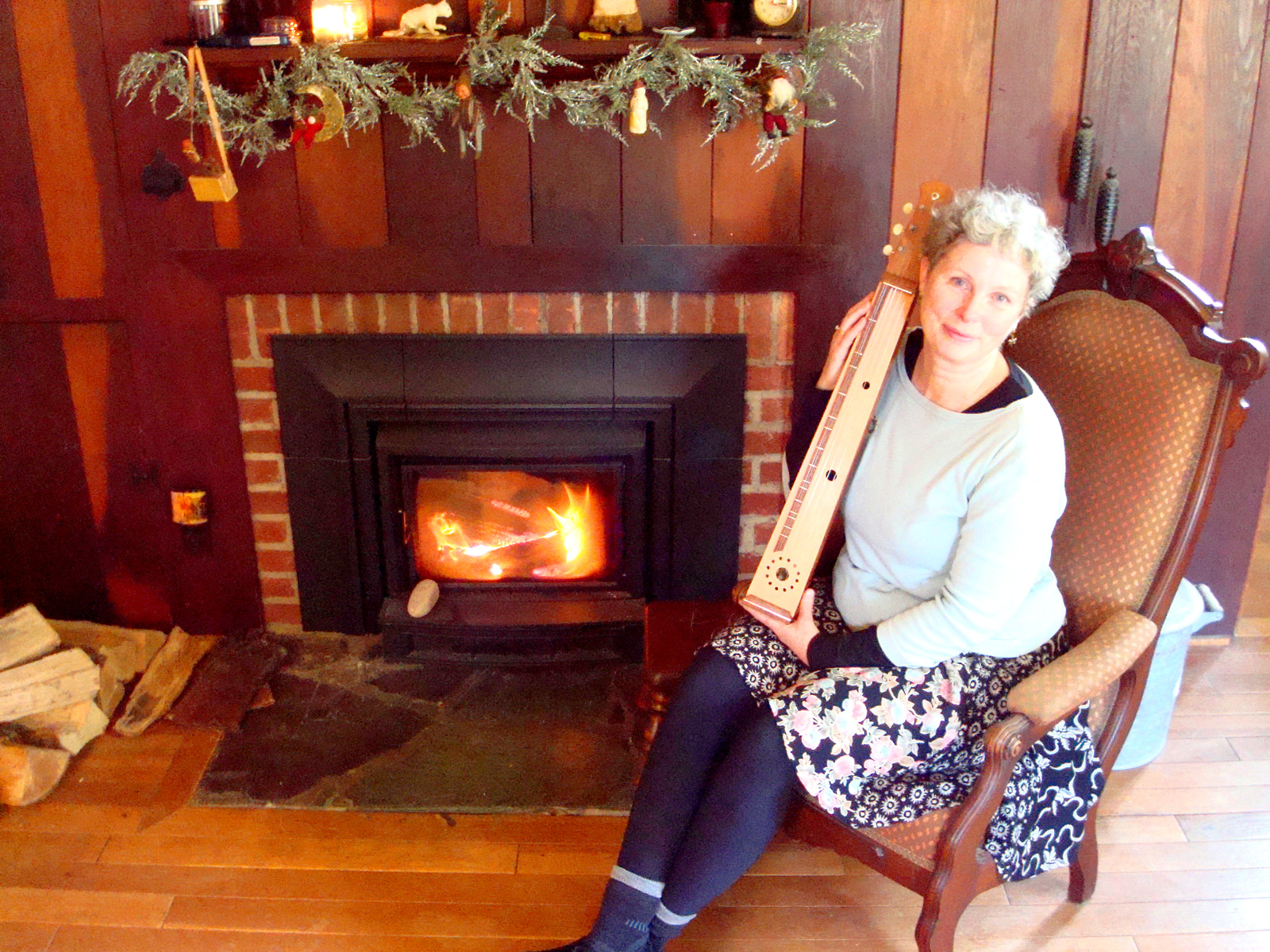 Here are some of John Henry's videos of him playing the epinettes he makes, he plays them so very beautifully, who could not succumb to their charms? :